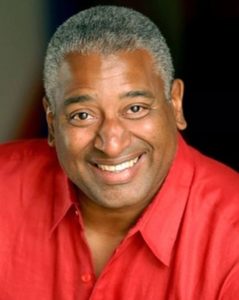 Robert Johnson is one of the busiest Colorado singers because he does much more than club gigs. His speaking voice is as valued as his singing voice. He has had enormous success in both, which he credits to luck and a level of professionalism.

Robert’s gift was first noticed in junior high by a classroom music teacher who forced a very shy Robert to “sing louder.” He did, then joined the junior high choir. Invited with the choir to do a show at another school, Robert nervously soloed a song from “Exodus,” which earned him a standing ovation. This shy boy’s confidence began to soar.

In college, he played football and had a double major: math and music. He studied classical and vocal opera.

After completing his degree in the Navy, not even considering a music career, he took a job at Honeywell and located in Denver, where he worked for a couple of years. While working late one night, he was overheard singing, and one thing led to another. A band was formed.

Robert became disenchanted with corporate life when a co-worker, close to retirement, was pushed out unceremoniously. Robert was offered the job, but he chose to quit corporate life forever. He boldly moved to New York City to make a life with his voice. No waiting tables for him!  He was fortunate to land a job teaching math, so he had his evenings to make the rounds of clubs. He met someone who said he ought to be in commercials and introduced him to the folks at a studio who recorded these. Commercials are very profitable, and he was on his way. You may have heard his voice (spoken and singing) in commercials from United Artists Theaters, IBM, Toyota, and Kentucky Fried Chicken.

He moved into doing backup singing with his first tour behind Lou Rawls followed by backing up Roberta Flack. Not too shabby! In traveling with Ms. Flack, he resettled in Denver, where he recognized that he could work both coasts and afford a house if he settled here. Lucky us!

While competing in that old TV program, Star Search, an old friend from junior high spotted him on the show and reached out to rekindle the friendship. This friend happened to be a clothing designer who had a client named Stevie Wonder. He invited Robert to come with him when he was delivering some clothing to Wonder. Talk about luck! Well, naturally, the two musicians ended up playing piano and singing all night long. Was this luck enough? Not yet! Sometime thereafter, one of Stevie’s backup singers got sick and Robert was invited to accompany him on the next tour. And he stayed 5 years, living in LA for 4 years.

He also spent years backing up Lionel Ritchie during Ritchie’s peak years. In all ways, Robert Johnson was a success. When these tours slowed down, Robert decided to settle down here in Denver and gig. 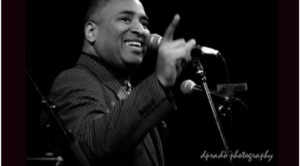 Since settling here, he has been named Best Male Vocalist in the Denver Post Readers Poll, Best Jazz Vocalist by the Colorado Black Artists Association, was honored as Colorado’s Best Male Singer by the News and Radio Media and Best Male Vocalist by the Colorado Songwriters Association. He’s one of the voices for the inductees of the Colorado Music Hall of Fame. Whether while in NY or here, I’m not sure, but he has shared the stage with Bob Hope and Stan Getz. He has appeared in national and regional productions of Porgy and Bess, Ain’t Misbehavin, Blues in the Night, A Brief History of White Music, Showboat, The Full Monty, and as the voice of the plant in Little Shop of Horrors. He sang the national anthem in a world series game and an NBA All-Star game.

He was a performer with the 17th Avenue All-Stars, an a cappella group that won National Harmony Sweepstakes in 1993. The group is still performing, though Robert left them years ago. He produces and records for others, including Dotsero.

You may not see Robert as often as one would expect, singing in clubs and such, but he continues to do voice-overs (for three years, he was the voice of C-Dot when you called for mountain weather reports), runs his own recording studio, composes, adds backups to the recordings of others, and to book as many as 20 summer festivals each year.

I love his CD “All Blue.” The next one, “So the Story Goes,” on which he wrote 8 of the 10 “neo-soul” tunes, just came out. In the works are two more to be released in spring and fall of 2022: “A long Road Traveled” (with a traditional jazz vibe and big band feel), and yet another, “Black Snake Moan” (with a full blues sound).

I admired Robert when we discussed his thoughts on his success. He said there are singers who may be better than he is but he feels he owes his success to understanding all this as a business. He knows never to overshadow the act he’s backing up, to be there on time and prepared, and to respect the journey.

Robert is said to “sing like butter.” I agree and hope to see you when his next local singing gig comes up. I’ll be there for sure.