She’d never admit to this moniker, but Tenia Nelson is most certainly a wonder woman. She heads two different bands, teaches at her home studio and at two schools, composes and arranges, pursues other arts and crafts, and manages a family at the same time. Let’s see how she got there.

As a child, Tenia had been hearing music in her home for as long as she can remember since her parents played R&B, Hip Hop, and such jazz artists as Miles Davis. Then when she was about 11, her aunt lost interest in pursuing music any further and gave Tenia a keyboard. With family money tight, she decided to teach herself to play. In middle school, her choir teacher helped her develop. She segued into classical percussion and still performs about once a year as a classical percussionist.

During high school, she became involved in Neil Bridge’s Denver City Wide High School Jazz Combo under the direction of Ron Jolly. The students received the prestigious Downbeat Award for Best High School Jazz Combo in the United States. During her senior year, she played the vibes and became more serious about a life in music. 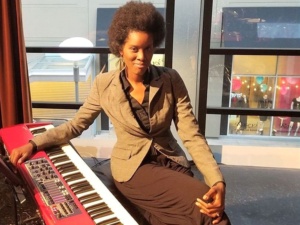 Tenia decided to pursue a degree in music education. Because of that program’s broad requirements, she now can play and teach many instruments, from keyboard to percussion, to ukulele, and more. Not only that, but she says “Music of many kinds runs through me.”

Let’s take a look at her early college music education. Tenia arrived a Metro State as the only female in the jazz program and no confidence whatsoever. Aren’t we lucky that Ron Miles was her first jazz teacher! He took her under his wing and Tenia cannot speak too highly of how he increased her belief in herself. As a lowly freshman, Ron Miles put her in a jazz combo of just three with Tenia on piano, a sax, a drummer, and no bass. Tenia could not imagine a jazz combo without a bass, but Ron taught her to emphasize her left hand to compensate for that lack. To accomplish this, Tenia spent hours listening closely to Teddy Wilson’s left hand and the great bass players like Paul Chambers and Ray Brown. She absorbed the suggestions of Denver’s Drew Morrell. Her own insecurity drove her to work, work, work to become the musician she wanted to be.

While still a college freshman, she participated in the University of Northern Colorado Jazz Festival. To her amazement (honestly, this gal is so humble!) she won the award for best solo. She credits her hard work.

Tenia received her Bachelor of Music Education degree in 2004 and her Master of Music degree with a specialization in jazz studies from University of Colorado in 2010.

I was particularly struck by the number of local luminaries with whom she has studied. It seems to be a complete list of our top senior jazz players: Art Lande, Eric Gunnison, Jeff Jenkins, Purnell Steen. She says Steen taught her to love to please audiences, and that’s still a hot button for her today. She feels it is important that members of her band and the audience should all be having fun!

So what is she doing now? First, she heads up Spherio, a highly respected trio that focuses on arranging and playing the music of Thelonious Sphere Monk. She has a trio called TNT (Tenia Nelson Trio) that plays all genres of music. They might do a full gig of Country and Western, one of all Be Bop, or a set of whatever they feel like! She plays freelance too, giving her even more variety and opportunity to play with different people. She teaches in her home studio as well as at Neighborhood Music School and the Denver Language School, a DPS charter school. She is on the board of directors for Gift of Jazz.

I learned a few surprising things in our meeting. First, I had never noticed that Tenia plays piano barefoot, so that she can enjoy contact with the earth and feel the musical vibrations. With her humility, she still gets nervous before each performance and cures it with a shot of whiskey! She’s a crafter and designs cards for a company as well as makes her own creative cards. She is even a fan of old-school country music! In public school, she was a competitive gymnast for 8 years and played soccer as well. She is still very athletic. She is the proud wife of Tim, mother to Thelonious (Theo), and owner of pup, Snowball.

And TNT is working now on a new CD which will be coming out later this year. I, for one, cannot wait for it!

On April 22, she’ll perform with TNT at Muse Performance Space, playing all the fun tunes the band enjoys performing including jazz, R&B, and possibly something Tenia has composed. If you haven’t been to the Muse, this is a great opportunity to add it to your favorite venues. Advance tickets can be purchased at museperformancespace.com.