Every jazz musician I meet comes from a different background. One will have had music in his life from day one and musically gifted parents; another will have first thought to study music as a major in college, having had no prior experience; yet another will have been so excited while happening on a recorded music piece they discover passion that way.

Victor, raised in Venezuela by a tone-deaf father, was forced by his musical mother to take piano lessons, as were his two siblings. Seven-year-old Victor resented having to pull himself away from his usual cartoons after school. The three of them took lessons for a few years and learned how to read music and play. But when the lessons ended, Victor just kept right on going, buying books and sheet music for himself.

He was encouraged by his uncle Angel, who had a lot of exposure to American music, loved music by Tommy Dorsey, Glen Miller, Mario Lanza(!), and such. While his uncle’s own kids, Victor’s cousins, would be outdoors playing games, Victor would be listening to American pop music like “Embraceable You” or tunes sung by Eydie Gorme. Strange beginnings for a jazz musician!

By age 16 or 17, he had a few gigs and began to study at a Venezuelan music school, J. A. Lamas. After completing about half of their music program, he was doing well enough to leave and begin touring and taking serious club gigs. The Simon Bolivar Symphony Orchestra would call on him if they were doing a pop presentation. Here he met and befriended Gonzalo Teppa. In fact, he has recorded many times in Venezuela with Gonzalo, on an album called Confesión a las Estrellas, a Venezuelan waltz recording which I am listening to as I write this Spotlight. Yes, readers, you can find it on Spotify, and I strongly urge you to do just that. It’s just gorgeous! 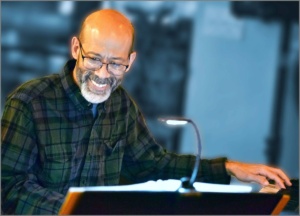 Victor lived in Seville during the 1992 World Expo there. Later, he moved to Madrid, where he met Bill Kopper, who was living there at the time, and they became friends. (This surprising small world happenstance continues—read on!). Three years later Bill got a gig on a cruise ship and invited Victor to take the piano part and to find a drummer and bass player. Enter Bijoux Barbosa. Victor was so funny when he talked about this cruise. He said it was the wrong band with the wrong audience for sure! This was a Latin/Brazilian band with a ship full of European guests, and they wanted no part of Latin music. Meanwhile, these musicians had to play three times a day for a total of about 7 hours a day. Oh, and it was a 6-month contract which they honored to the end.

Eventually, in 2012, he came to live in Boulder to escape the violence in Venezuela. He sure had a ready-made group of musicians to help him get started here.

He had played mostly “pop” music in Venezuela but came to recognize his love of the music of South America when he could no longer be there. Today he considers himself much more a player of choro and other South American music than a straight-ahead American jazz player. Here I must interject that this view of his floored me, as I recently saw him at a gig, backing up Robert Johnson, as totally American a jazz, blues, and soul singer as you can find. Victor had a solo on the tune “Nature Boy” that silenced the audience and had the five other musicians simply gaping at his brilliance as he played. It was a moment to remember, frankly!

Even with no degree, he teaches Latin Jazz at the University of Colorado Boulder. Interestingly, he is currently exploring pursuing a degree there. Other instructors in the jazz department there will have the unusual experience of seeing one of their peers in their classes!

Here in the front range, Victor was a member of Ginga for a long time. They began as a Choro and South American instrumental group but evolved to primarily samba. He plays with a salsa band, Los Chicos Malos, and partners with Mike Abbot in a quartet. Abbot is a guitarist for CJRO. Victor also subs for Eric Gunnison in the Coracao quartet and Nelson Rangell Quartet.

Watch for a special fund-raiser coming May 22 at the Dairy Arts Center in Boulder. It will be a tribute to Jose Alberto Cabrera, the singer for Los Chicos Malos, who recently died of Covid. Victor will be on acoustic piano, and Gustavo Caruci on voice, Venezuelan cuatro, and bass. One hundred percent of the profit will go to Alberto’s family. You don’t want to miss this one!