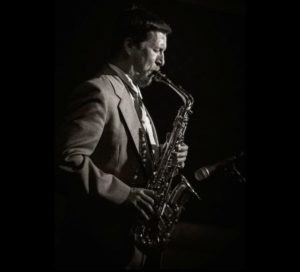 Saxophone player Wil Swindler is well known in jazz circles in Colorado and around the country,  but he’s most active on the Colorado jazz scene.  He leads a modern bop quintet called Goodrattle which plays music from the Cannonball Adderly Quintet, Pepper Adams, and originals. Goodrattle has a recording called “The Right Riot,” that you should hear. Swindler plays with the Peter Sommer Septet, Al  Hood’s H2 Big Band, Colorado Symphony, the Ben Markley Big Band, the Colorado Jazz Orchestra, and many more.

He leads a unique small big band called the Elevenet that often plays at Nocturne and other area jazz venues. He writes all of the music for Elevenet, and his compositions have been compared to the work of Gil Evans. Think Miles Davis’ Birth of the Cool and Miles Ahead. But the Elevenet includes bass clarinet, alto flute, euphonium, French horn, etc., all of which create a wall of sound. Their album, Universe B, has been very positively reviewed, with David Kane stating “although the music remains tonal throughout, the harmonic language is intriguingly complex while remaining utterly accessible.” Readers, you really must seek out Elevenet’s CD “Universe B.” Get a CD or at least stream it.  It’s truly unique and special.

Wil began studying music at age 5 and was able to read music as quickly as he was able to read words. In third grade, at age 9, his deepest wish was to get a saxophone for his birthday. He wanted it so badly that he searched the house and found it. He made the mistake of telling his sister, and his parents punished him! This in no way swayed him from his goal of playing the saxophone!

After graduation, Wil relocated to New York City, where he played with Toshiko Akiyoshi and Bill Warfield’s NY Fusion Ensemble.  In New York City’s very competitive environment, he was able to work consistently.

He married a New York girl and moved back to Texas. His wife, April Johannesen, is a successful Denver-based clarinetist and for 2 years she commuted from Austin to Fort Collins to play with the Fort Collins Symphony. I loved hearing from Wil that they decided to move to the Front Range for his wife’s career!

For many years, Wil was driven to win a Gil Evans Fellowship. He composed a competitive entry each year until he won it in 2008, which turned out to be the last year the award was given.

Obviously, Wil has thrived here in Colorado. He currently works two full days a week as Associate Director of Jazz Studies at CSU, moving from leading the second jazz ensemble to the first this year. He’s also an adjunct jazz instructor at DU. We talked about the depth of the jazz environment here in the front range.  Wil feels part of the reason for its richness is that most of the state’s population is concentrated in this part of the state. In other states, you might have pockets of jazz musicians in cities around the state. Here, we’re all close enough that musicians from Greeley, Fort Collins, Denver, and Colorado Springs are close enough to routinely get together, and they do!

Do check out Wil’s web page here and on YouTube.