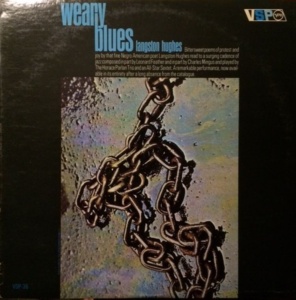 Seems there’s always something new to learn about our favorite jazz musicians—and our favorite jazz poets. Newly-discovered poems from Langston Hughes, for example, appeared a few years back, written in “depths of the crisis” of the Great Depression.

These poems are dark and bitter, “some of the harshest political verse ever penned by an American,” writes Hughes scholar Arnold Rampersad. They are not the celebratory Hughes we read in school. While angry conservatives and McCarthyism may have forced this side of him into hiding, in Hughes’ view, poetry, like jazz, had room for everything, whether it be love or rage. “Jazz is a great big sea,” he wrote in his 1956 essay “Jazz as Communication.” The music “washes up all kinds of fish and shells and spume and waves with a steady old beat or off-beat.” His task, in poems like “The Weary Blues” had been to put “jazz into words,” with all of its wild mood swings, lovers’ quarrels, rapid-fire conversations, and heated arguments.

Throughout his career, Mingus had been moving in the other direction, taking storms of ideas—angry, melancholy, joyful, etc.—and turning them into sounds. But his music, always “supremely vocal,” notes The Nation’s Adam Shatz, spoke in one way or another. Mingus “collaborated with poets in East Village Coffeehouses” and won his only Grammy for a piece of writing, the liner notes for his 1971 album Let My Children Hear Music.

Black Poetry Day on October 17, honors past and present black poets. The day also commemorates the birth of the first published black poet in the United States. Jupiter Hammon was born in Long Island, New York, on October 17th, 1711.

The day celebrates the importance of black heritage and literacy. It also recognizes the contributions made by black poets and shows appreciation to black authors.

Tune in to The Nightside with Andy O’ on Sunday night, October 17, from 8 to midnight.