Lullaby of Birdland | Stories of Standards

“Lullaby of Birdland” by George Shearing and George David Weiss

“Lullaby of Birdland” was written in 1952 by George Shearing with lyrics by George David Weiss, who used the pseudonym B Y Forster to get around the rule which at that time forbade collaboration between ASCAP and BMI composers. The title refers to the Birdland jazz club, named for Charlie “Bird” Parker. Shearing had started playing at the club, then known as the Clique, in 1949, the same year it was renamed Birdland. He regarded the song highly enough to use it in the title of his autobiography – “Lullaby of Birdland: The Autobiography of George Shearing”. When the owner of the club, Maurice Levy, arranged for radio station WJZ to use it for the broadcast of a regular show he asked Shearing to record a theme song. Not caring for Levy’s choice, Shearer offered to write one. After several futile weeks, Shearer leapt to his feet in the middle of dinner, dashed to the piano and wrote the whole song in 10 minutes. As he said later “… it’s not that I dash something off in ten minutes, it’s ten minutes plus umpteen years in the business.” Weiss added lyrics later and Sarah Vaughan recorded it in December 1954. The Blue Stars, a Parisian vocal group, took the song to #16 in 1956; Bill Haley and His Comets recorded a version (“Lullaby of Birdland Twist”) in 1962. The many recordings include releases by Quincy Jones, Chaka Khan, Amy Winehouse, Mel Tormé and more.

George Shearing (1919-2011) was born in London to working class parents and began studying piano at the age of three at the Linden Lodge School for the Blind. He was already highly regarded when he moved to the United States in 1947, where he formed his first quintet in 1949. He wrote over 400 songs, won numerous honors and was knighted in 2007. He died in 2011 and will long be remembered for his wit and wordplay, his warmth and generosity as well as his music.

George David Weiss (1921-2010) wrote songs for Broadway, the movies, jazz and pop. Despite his interest in law and accountancy, he wound up studying at Juillard followed by a long and brilliant career in music which included time spent as president of the Songwriters Guild of America. Early in his career he wrote arrangements for big bands, including Stan Kenton, Vincent Lopez and Johnny Richards. His film scores, Broadway musicals and other compositions led to his 1984 induction into the Songwriters Hall of Fame. 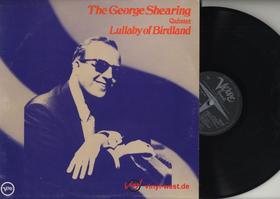