“Much of the power of our Freedom Movement in the United States has come from this music. It has strengthened us with its sweet rhythms when courage began to fail. It has calmed us with its rich harmonies when spirits were down. And now, Jazz is exported to the world.” —Martin Luther King, Jr., Berlin Jazz Festival 1964

The Martin Luther King, Jr. holiday always comes around with a tug toward the higher call.  We know his life’s work was toward justice and peace, and so, when “his” day approaches, the better angels of our nature aroused.

Am I doing enough?  How can I help my fellow man? What would Dr. King say about this situation?

Colorado’s Dr. King holiday was signed into law in 1984. Each year, communities around the Centennial state mark the man and his dream with events. See this list for answers to the question, “what can I do?”

With Infinite Hope: MLK and the Civil Rights Movement
Airing on RMPBS on Thursday, January 13 – 10 pm
With Infinite Hope looks back at the life, leadership, and legacy of The Rev. Dr. Martin Luther King, Jr. The program follows King’s career from his hiring at Dexter Avenue Baptist Church and leadership of the Montgomery Bus Boycott, through his death on April 4th, 1968 in Memphis. The documentary includes interviews with people who participated in well-known events of the Civil Rights Movement: the Montgomery Bus Boycott, the Freedom Rides, the Birmingham Children’s March, Selma, and the Memphis Sanitation Workers Strike.

2022 MLK Peace Breakfast: Overcoming the Pandemic of Racism
Friday, January 14 at 9 am
The breakfast was created to celebrate the life and philosophy of Dr. King and includes a program and awards ceremony.

The Dream: Yesterday, Today, and Tomorrow
January 16 – 1 to 5 pm
Dairy Arts Center, Boulder
Presented by the National Association for the Advancement of Colored People (NAACP) Boulder County and Second Baptist Church and marks the opening of the exhibit from the Withers Museum of Memphis by the noted Civil Rights Photographer, the late Dr. Ernest C. Withers. This opening event will include musical, spoken word, dance, and video presentations, as well as several featured speakers. The exhibit will run through February 28, and the ongoing display is presented by the NAACP Boulder County Executive Committee for African American Cultural Events. Reserve your tickets here.

Undoing the Noble Crusade Documentary Screening
January 16 at 7 pm
Dairy Arts Center, Boulder
Presented by Boulder Community Media. Undoing the Noble Crusade is based on a passage from “Why We Can’t Wait,” a book by Martin Luther King, Jr. The short film by Alan O’Hashi commemorates the 50th anniversary of the Native American Rights Fund that was established in the spirit of the NAACP Legal Defense Fund. This screening will be followed by a screening of “Beyond Sand Creek” about the efforts of the Arapaho tribe to undo stereotypes, renew their language and culture, and tie those to their traditional homeland in Boulder. Reserve your tickets here.

Martin Luther King Marade (March & Parade)
Monday, January 17 – 9 am
City Park & Civic Center Park, Denver
Marchers and parade fans typically congregate at the Dr. King memorial site in City Park at 9 am. The Marade begins at 10 am with participants marching together to Civic Center Park. This year’s event may be virtual. Map

No One Should Be Hungry
Monday, January 17 – 2 to 5 pm
9898 E Colfax Ave, Aurora
To have free meals delivered, picked up, or to volunteer, click HERE or call 303.297.0823
Free Dinner Giveaway & Resource Fair In partnership and collaboration with the community, the brother jeff Cultural Center is providing FREE meals on Dr. Martin Luther King Jr. Day, January 17, 2022. If a meal would help you and yours, please fill out the form below. Meals will be ready starting at 2:30 pm and will be served and delivered until 4 pm.

Mile 17: A Conversation on the Labor & Love of Belonging
Monday, January 17 – 4 to 6 pm
RedLine Contemporary Art Center, Denver
Award-winning choreographer and performance artist Helanius J. Wilkins is set to lead Mile 17: A Conversation on the Love & Labor of Belonging, a panel to honor and celebrate the Martin L. King Jr. holiday by creating a brave and courageous space to bring together intergenerational members of the Denver-metro area to reflect on stories that inform our sense of belonging and community today, and dreams for a better future. 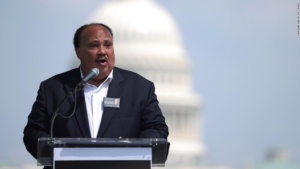 (CNN) The family of Martin Luther King Jr. is calling for “no celebration” of MLK Day without the passage of voting rights legislation, putting pressure on President Joe Biden and lawmakers to act on federal voting rights bills that have stalled in Congress.

Martin Luther King III, his wife Arndrea Waters King, and their daughter Yolanda Renee King plan to mobilize activists on MLK weekend to push for Biden and Congress to apply the same efforts to federal voting rights bills that they used to pass the $1.2 trillion infrastructure bill. They hope to send the message: “you delivered for bridges, now deliver for voting rights.”

“President Biden and Congress used their political muscle to deliver a vital infrastructure deal, and now we are calling on them to do the same to restore the very voting rights protections my father and countless other civil rights leaders bled to secure,” Martin Luther King III said in a statement Wednesday, adding that they “will not accept empty promises in pursuit of my father’s dream for a more equal and just America.” more about MLK: King Family on CNN