MaryLynn Gillaspie and her All-Star Quintet 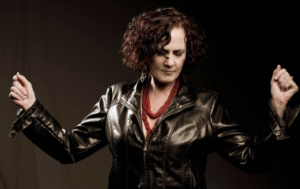 This Friday night, December 6 at 7 pm is the return of a perennial favorite of Caffè Sole, MaryLynn Gillaspie, a great singer that combines the precision and control of classic jazz vocal styling with a modern sensibility and power that makes her music always relevant and exciting. I’m a big fan! This show will be no exception as she will perform with these Premier Colorado jazz musicians: Peter Stoltzman Gray – piano, Wayne Wilkinson – guitar, Gonzalo Teppa – bass and Dru Heller – drums. this band is a tour de force.

MaryLynn loves to sing an eclectic assortment of music: everything from 1940s standards, straight ahead jazz and updated versions of 60s pop tunes arranged and performed with the top of the crop of the areas local musicians. Ms Gillaspie was a founding member of the Grammy-nominated vocal jazz group, Rare Silk. The group got their start in Boulder, CO. Their very first album, New Weave flew to the top of the Billboard Jazz charts and received 2 Grammy nominations and toured the world singing in the US, Europe, and Japan. Rare Silk received acclaim working alongside artists such as Miles Davis, Branford Marsalis, Dizzy Gillespie, Benny Goodman, and opening acts for Spyro Gyra and BB King. Their touring took them to some of the best venues in the country.