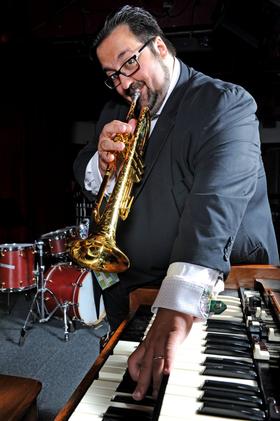 Just the other day, singer and actress Idina Menzel had a little press conference at the Buell Theater with her fellow co-stars from the musical If/Then that is at the Denver Performing Arts Complex through October 25 (303-893-4100).

When asked about essential role she plays in the national touring company of the Broadway show, Menzel, who had a mega-hit with the song “Let It Go” from Frozen, provided an answer that would warm the heart of any contemporary student of leadership. She noted that when illness had kept her off the stage, others had filled in admirably and done a great job, reminding us that no one is indispensable.

Though she added with a good-natured smile that while lots of people have followed her in the role of Elphaba in the musical Wicked, no one has done the role better than she did.

The role and importance of individuals in any collective enterprise is always the subject of interesting debate and it is a question that constantly emerges in jazz, especially given the emphasis in the music of having an individual voice.

Over the years, I would, on several occasions, go to hear Miles Davis in clubs only to discover, after a long wait, that he wasn’t going to make it. The rest of the band – made up of talented musicians – still played. But I would still walk away thinking the band was good but I wanted to hear Miles.

Speaking of Davis, on Saturday and Sunday Hammond B-3 master Joey DeFrancesco is at Dazzle, 930 Lincoln, with a trio featuring Jason Brown on drums and Dan Wilson on guitar.

Remember that DeFrancesco toured as a member of the Miles Davis band while still a teenager. At 16, he signed with Columbia Records and he has been at the forefront in the B-3 revival. H also sings and plays trumpet. He is on stage at 7 and 9 p.m. on Saturday and 6 and 8 p.m. on Sunday (303-839-5100).

On Thursday, pianist Tamir Hendelman brings a trio (with Dean Koba and Alex Frank) to Nocturne, 1330 27th St. at 7 p.m. (303-295-3333). The trio also plays at a Peakview Jazz event at the Greeley Country Club, 47th Ave. and 10th St. in Greeley, on Friday at 8 p.m. and a sold out “Jazz for Jazz Lovers” home concert on Saturday at 3 p.m. Hendelman, the pianist with drummer Jeff Hamilton’s Trio and the Clayton-Hamilton Big Band, is also doing workshops at the University of Denver’s Lamont School of Music on Friday at noon, at the University of Northern Colorado at 3 p.m. on Friday and at Drew Morell’s home studio on Saturday at 10:30 a.m.

Back at Dazzle, tenor saxophonist and composer Fred Hess brings a sextet to the stage on Tuesday at 7 p.m. The saxophonist grew up in New Jersey and came to Colorado in 1981. The following year, he launched the Boulder Creative Music Ensemble (that included long time associate Ron Miles on trumpet) and during the decades that followed, he released a number of highly regarded small group disks.

More recently, Hess, who is part of the Music Department at Metro State University, has led and recorded with an imposing big band that does a great job with his superb compositions. Hess is a strong player and an absolutely top shelf composer. He was part of the Denver jazz group led by Cream drummer Ginger Baker and he is always worth hearing.

Also at Dazzle, saxophonist Josh Quinlan has a quartet with guest Greg Osby on Friday at 7 and 9 p.m. Osby, out of St. Louis, has played with a number of folks including drummer Jack DeJohnette and has been part, like Steve Coleman, of the M-Base crew. The saxophonist, who began recording on the JMT label in 1987 and has released a long string of disks on Blue Note starting in the 1990s, is a potent player who has covered any number of musical bases.

Dazzle also offers the Queen City Jazz Band with guest New Orleans trumpeter Duke Heitger on Thrsday at 7 p.m., the Metropolitan Jazz Orchestra with the Longmont All Stars on Monday at 7 p.m. and guitarist Steve Ehrhardt and Corn Maze (a quintet that includes Art Lande on piano) on Wednesday at 7 p.m.

The list if upcoming jazz players coming to town over the next few months is incredible. Next week, for example, tenor saxophonist Javon Jackson (who grew up in Denver) is at Mount Vernon Country Club with a quintet that has Eddie Henderson on trumpet on October 22. That same night flugelhornist Dmitri Matheny and his group is in town at Baur’s Listening Lounge. And that’s just the start of a virtual flood of talent coming to town.