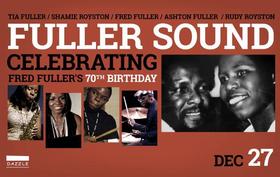 It’s appropriate that the major event during the musical week that includes Christmas is a family reunion. On Wednesday, the incredibly talented Fuller family gathers at Dazzle, 1512 Curtis, to celebrate bassist Fred Fuller’s 70th birthday at 6 and 8:30 p.m. (303-839-5100). Think about this: the bassist’s daughter Tia Fuller is among the fastest rising stars in jazz, while another daughter, Shamie Fuller-Royston, is a fine pianist and superb composer who has several discs under her belt. And to top it off, Shamie is married to drummer Rudy Royston who was named as the rising-star drummer in the 2014 DownBeat “Critics Poll.”

By the way, in that same 2014 poll, Tia Fuller was named as the rising star soprano saxophonist, building on her double-barrel recognition as both the rising-star alto saxophonist and the rising-star flute player in DownBeat’s  2013 survey of critics. And you have a chance to hear the entire Fuller Sound family on Wednesday when the Fuller daughters and son-in-law join father Fred and another sibling, drummer Ashton Fuller for the birthday celebration.

Tia moved East at the start of the 21st century and was introduced around the New York scene by a fellow alto-playing product of Denver, Brad Leali (who was then with the Count Basie Orchestra). She was back in town not too long ago to see her father who was in the hospital. When I saw her briefly during that time, she talked about her forthcoming new CD on Mack Avenue Records with players such as Dave Holland and Jack DeJohnette. That’s something to look forward to and so too is the family musical reunion on Wednesday.

You know it’s the Holiday season when along with traditional music you hear the Charlie Brown sounds of pianist/composer Vince Guaraldi (who died in 1976 at the age of 47). On Saturday and Sunday at Dazzle, pianist Annie Booth along with her group plus a vocalist offer up a “Charlie Brown Christmas” at 5:30 and 8 p.m. on Saturday and 4:30 and 7 p.m. on Sunday. You might have to scramble to get in since all shows are listed as sold out. Also, on Thursday at Nocturne, 1330 27th St., there’s the second night of “The Great Holiday Songbook” with a quartet plus singer Heidi Schmitt at 7 p.m. (303-295-3333). Charlie Brown is included in that as well. Singer Wellington Bullings is at Nocturne on Friday, followed by Keith Oxman on Saturday, Patrick McDevitt on Tuesday and Greg Wahl on Wednesday. Christmas is also on tap at Caffe Sole, 637R S. Broadway in Boulder, with Janine Gastineau on Saturday at 7 p.m. (303-499-2985).

Back at Dazzle, it’s great to see that in addition to the sold-out shows from Annie Booth on Saturday and Sunday, the performance by the 19-piece Adam Bartcczak Republic on Thursday at 6 p.m. is sold out (there are some tickets for 8:30 p.m. available) and the two sets from singer Mandy Harvey on Friday at 6 and 8:30 p.m. are sold out. To see “sold out” next to area-based musicians is something that lights up the heart. On the morning front at Dazzle, Friday lunch at 11:30 a.m. has pianist/singer Ellyn Rucker and Downtown Brunch on Monday has singer Ed Battle starting at 10 a.m. 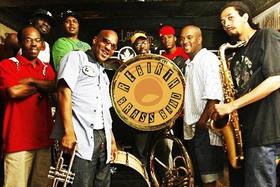