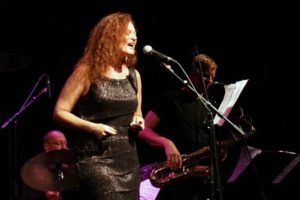 One of three daughters of an accomplished pianist and a fine singer, Terri Jo started her professional musical life at about age 10 singing three-part harmony with her sisters at a Nebraska county fair. That first show included “Mairzy doats and dozy doats and liddle lamzy divey.” There was no direct leap to jazz.  Rather, she has lived a life of all kinds of music that finally brought her to Denver and her much-deserved respect as a jazz singer.

Through high school, she composed, sang contemporary folk and played her guitar, influenced by Joni Mitchell and others. Her first CD was called “The Dodson Sisters,” recorded when she was just 14 years old.

Over the years, she was the singer for a rock band; she was in a female acapella group with which she recorded 2 CDs and toured for the Nebraska Arts Council singing Andrews Sisters songs and musically comedic routines. She composed many songs, including “Six Little Angels” that was selected for a taped NPR program narrated by Judy Collins. Another song she composed was featured multiple times on the popular radio show “Car Talk.”

So, how did she segue into jazz? Back in Nebraska, she was approached by the leader of Jazz Factory, a local band consisting of some of the most accomplished jazz musicians in the state. They were looking for a singer to front the band.  At first she demurred, as she did not consider herself a jazz singer. But they brought her on board and she was with them many years, recording 2 CDs and appearing at two particularly large concerts (an audience of 5,000 at one, and 3,000 at the other.) She learned so much from these folks, and it was a turning point for her.

With that background, I was scratching my head to learn she sings with the Park Hill Brass group. (A folk singer fronting a 10-piece brass group?) Here’s how it happened. The brass band was in a festival near Grenoble, France, called “Jazz en Vercors.” The group was so well received, the audience kept demanding encores.  They needed to change it up some, and Terri Jo was enlisted to come out to sing with them, unrehearsed, unplanned. With the expanded group, the encores continued to be called for, and the rest is history.  She’s their singer now!  She has fronted them at the Denver Country Club.

She sings solo, in pairs, and in groups.  There’s the Quirktett, consisting of Terri Jo with three other outstanding area vocalists. Influenced by the sounds of Lambert, Hendricks, and Ross; Rare Silk; and Lake Street Drive, they incorporate a living, breathing, and swinging vocal quartet with an exceptional rhythm section of some of the metro area’s top jazz musicians. They have performed at Dazzle, where I saw them and can attest to their swing!

Last week, as Dazzle begins to open up, I ventured out to see Terri Jo with a trio. I swear, she just gets better and better, engaging with the audience and giving her own interpretations of jazz tunes and others. She even sang one by Three Dog Night!

Terri Jo is the director of the Songbird Jazz Festival, which is mostly workshops for singers and the instrumentalists that work with singers.