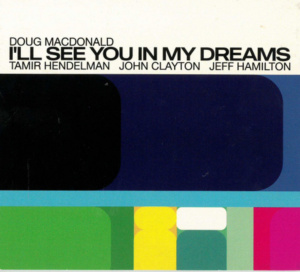 Doug MacDonald Quartet: “I’ll See You In My Dreams”
Over the last five years guitarist, Doug MacDonald who commutes between Hawaii and Los Angeles has released close to ten recordings on his own DMAC label. His prolific albums have not been at all repetitious, always selecting different accompanists and group formats. His new one has the stellar cast of Los Angeles’ best: Tamir Hendelman-piano, John Clayton-bass, and Jeff Hamilton-drums, it’s as good as it gets in jazz trios. With two exceptions, all nine tunes are either standards or songs from the jazz canon, the 2 that are not, come from the pen of guitarist Doug MacDonald. 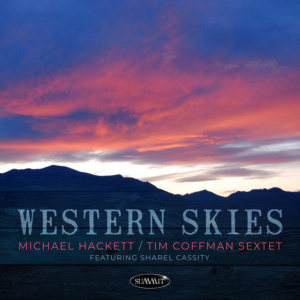 Michael Hackett-Tim Coffman Sextet: “Western Skies”
Although called a sextet, their habitual group line-up, this time out, Michael and Tim expand to an octet by adding the stand-out alto saxophonist, Sharel Cassity, and Arno Gonzalez on timbal and guiro. Trumpeter and flugelhornist Michael met trombonist Tim in 1983 when both were students at the Indiana School of Music, both currently live in Chicago as do the other musicians on this session that has a strong Latin jazz feel throughout due to the 2 percussionists. Hackett composed “Western Skies” in memory of his recently deceased father who lived on a ranch in the Bitterroot Mountains of western Montana. The album cover has a beautiful photo of sunset over those mountains from the ranch. 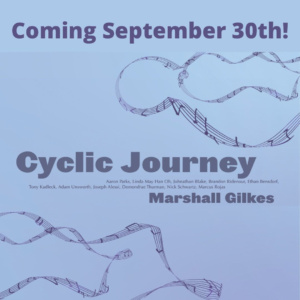 Marshall Gilkes: “Cyclic Journey”
Despite being a virtuoso trombonist with an amazing discography and respected as a trombonist’s trombonist by his peers, Gilkes is hardly among the best-known musician among jazz fans. For his newest outing, Marshall chose some top-of-the-chain musicians to record with him with the hope of expanding his fan base. Gilkes on the ‘bone has a dynamic trio, Aaron Parks-piano, Linda May Han Oh-bass, and Jonathan Blake on drums to provide the engine for the big band conducted by Marshall. All ten compositions were written, arranged, and conducted by Marshall Gilkes. A stand-out recording!

KUVO Studio Club & Beat Collective members, you will receive an invitation via email, be sure to RSVP. Space is limited. If you’re not in the Studio Club and are interested in learning more about our clubs, click here.