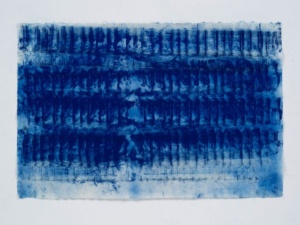 Because I’m in the “vulnerable” category, I’ve not ventured far from home during this time of COVID. But earlier this week, I did make an exception to that rule in order to check out pianist Jason Moran’s art on display at the Museum of Contemporary Art in downtown Denver titled “Bathing in the Blues.” The exhibit consists of works of pigment on Gampi paper along with additional displays that represent the Three Deuces club in New York that includes a player piano, drum kit, and bass and a cooperative visual piece that has Moran displaying his playing.

Kudos to the MCA for hosting this exhibit that runs through January 30. 2022 and to Moran for recognizing Denver’s ongoing connection to the jazz tradition that includes the pianist’s inclusion in the group led by cornetist Ron Miles on “I Am a Man” (2017) and “Rainbow Sign” (2020).

The next concert tied to the exhibit will be the December event with pianist Purnell Steen and company.

Of course, you don’t have to wait until December for music. On Friday, the Newman Center at the University of Denver opens its jazz series with singer Veronica Swift. Swift turned in a second-place finish in the 2015 Thelonious Monk competition (now the Herbie Hancock competition). The Virginia native quickly build on that performance so that in the latest DownBeat Critics Poll, she emerged in the third slot in the female vocalist category (one position behind Jazzmeia Horn who won the 2015 Monk competition) and occupied the fourth slot in the vote for Rising Star Jazz Artist. Swift’s current CD “This Bitter Earth” also had enough critical support to make the list in the Jazz Album of Year category. And I should mention here that Colorado-connected players Ron Miles, Bill Frisell, and Rudresh Mahanthappa also had discs on that list. The show at the Newman Center is at 7:30 p.m. 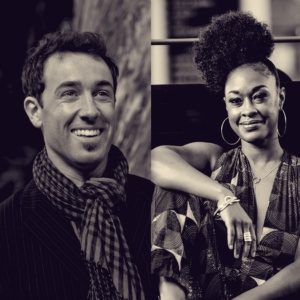 Additionally, this week, Hammond B-3 man’s band Wil Blades comes to town to perform with Denver-based singer Kim Dawson at Dazzle at Baur’s on Thursday and Friday. Blades has spent time in blue groups as well as in straight-ahead jazz bands along with players such as Donald Harrison, Nicholas Payton, and Charlie Hunter. The first set each night features the Blades-Dawson duo, while the second has Dawson with a band that includes Blades. The music on Thursday is at 6 and 9 p.m., while the Friday sets are at 7 and 10 p.m.

Following Blades/Dawson, saxophonist Nelson Rangell is at Dazzle on Saturday at 6 and 9 p.m. with a quartet that has Eric Gunnison on piano, Mike Marlier on drums, and Bijoux Barbosa on bass. Rangell, who spent time in the Gil Evans Orchestra while living in New York, is a player who knows how to grab your soul.

In addition to the sounds at Dazzle, the Denver Press Club hosts saxophone Keith Oxman on Thursday at 6:30 p.m., while the sounds also keep coming from Nocturne Jazz & Supper Club and the Muse Performance Space.