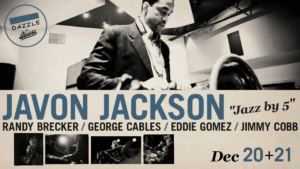 Among the treats of Christmas, there’s nothing better than tenor saxophonist Javon Jackson who returns home for the Holidays each year with a package of outstanding musicians. This year Jackson unveils that package at Dazzle on Friday and Saturday and it is truly an all-star one with Randy Brecker on trumpet George Cables on piano, Eddie Gomez on bass and Jimmy Cobb on drums.

Though born in Missouri, Jackson grew up in Denver and travelled east to Berklee College of Music in the late 1980s. Before he could even gain a Boston accent, however, he left Boston to join Art Blakey’s Jazz Messenger – the most famous training ground for up-and-coming young players in jazz that has ever existed. After his time as a Messenger, Jackson joined trumpeter Freddie Hubbard’s band and brought his saxophone to the studio and/or stage in the company of drummer Elvin Jones and many others, including Charlie Haden, Ron Cater, Curtis Fuller and Louis Hayes.

As the 1990s began to unfold, the Javon began recording as a leader, most notably with Me and Mister Jones. In the mid-to-late 1990s, he recorded five discs on Blue Note Records and has, more recently, added pianist Les McCann as a special guest to performances by his band. Also, in 2012, Jackson received the prestigious Benny Golson Award from Howard University in recognition of his excellence in the music. A year after that, the saxophonist became the Director of the Jackie McLean Institute at the University of Hartford. That’s a long way from Jackson’s time as a young player in Denver sitting in at El Chapultepec.

For this visit, Jackson has a truly all-star band in tow. Trumpeter Brecker (like his late brother, saxophonist Michael Brecker) is not only a leader in crossover jazz, he is simply a monster player who can do it all. Pianist Cables is outstanding player who has been in the company of most, major post-bop musicians, while bassist Gomez is a significant player in the music in his own right. Cobb, who has recorded with Jackson, spent a long time with Miles Davis and is the last survivor of the trumpeter’s super classic Kind of Blue album.

At Dazzle on Friday and Saturday, Jackson’s Jazz By Five band plays at 6:30 and 9 p.m. If any one of these players came to town with their own band, watching that group would be most worthwhile, seeing those players on stage all at once is a very special Holiday treat. 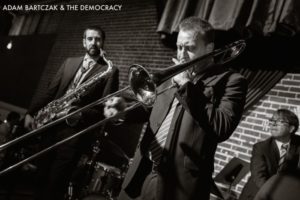 Also as we approach Christmas, Dazzle has Adam Bartczak’s 19-piece Republic Big Band offering up “A Not-So-Silent Night” on Thursday at 6:30 and 9 p.m. and the Annie Booth Trio with singer Max Wellman doing pianist Vince Guaraldi’s “Charlie Brown’s Christmas” on Sunday at 4:30 and 7 p.m. and on Monday at 11:30 a.m., 6 p.m. and 8:30 p.m. Charlie Brown is also in town at Nocturne Jazz & Supper Club on Sunday with the club’s “Swinging Holiday Songbook” at 5 p.m.

There’s also, now drummer Clare Church at La Cour on Friday at 7 p.m. and the groups the Founding Four and Brad Goode and Friends at the Muse Performance Space in Lafayette on the 20th and 22rd respectively. Happy Holidays.

KUVO JAZZ & THE DROP Present "SUCH" Live in the Masterpiece Studio