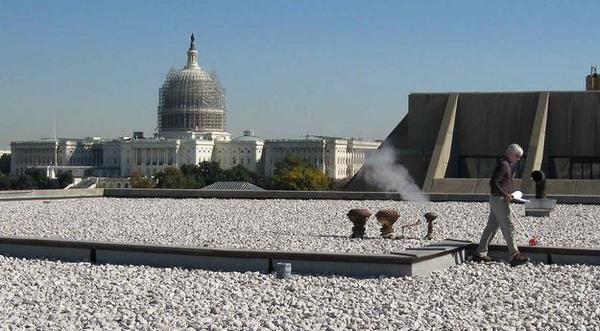 With zero congressional wrangling, President Obama sent down Executive Order 13693, dubbed “Planning for Federal Sustainability in the Next Decade,” which mandates that federal agencies get at least 30 percent of their electricity from renewable sources by the year 2025.

The National Renewable Energy Laboratory in Golden, Colo. has the task of guiding building supervisors toward that goal.  Andy Walker, Ph.D., Principal Engineer with NREL’s Integrated Applications Center, joined “First Take with Lando and Chavis” to talk about the massive, fast track program.

Planning solar retrofits for 35,000 federal buildings (a lot of them overseas) can done only as one would eat an elephant – one bite at a time.  “The energy hogs – the worst users (of energy) – were built in the 1970s and 80s,” said Walker.  He estimates that a quarter of all federal buildings are in historic districts or are themselves historic buildings.

“Any building that was built before 1940 was probably built with daylighting and natural ventilation.  Over the years those features have been compromised by dividing space up into private offices.  One strategy is to restore the historic features of a building.”

Other challenges facing solar retrofits: “The structure might be very strong, and likely to have strength beyond what is needed, but a lot of times the roof condition itself is poor.  We might have to replace the roof as part of a solar project.  Also, electrical service is small and needs to be upgraded.”

Engineers are even looking at America’s iconic memorials and monuments.  “Solar has been looked at on the part of the Lincoln Memorial – which people can’t see from the street.  But in a place like Washington, D.C. that’s the other challenge with doing any kind of project on a historical building.  There are a large number of stakeholders (who) are going to have an opinion about whether (solar panels) are acceptable in a historic district or not.  What we’ve found acceptable is that if it’s on a part of the roof, surrounded by a parapet wall and not visible from the street, there’s a good chance it might get approved.”

Just three years ago, a solar retrofit was completed on Alcatraz Island, generating 307 kilowatts from photovoltaic collectors on the cellblock roof.  The infamous prison island hosts one million visitors a year, and with a diesel back up generator, it’s entirely off the grid.

NREL also has a high-tech system for plotting out where the sun shines.  “We use our geo-spatial mapping tools.  We have data on the solar resource on a pretty fine resolution across the United States.

“I can’t say it’s just because of the current administration, but the growth in solar (energy) has been tremendous due to technology and the economy of scale.  The cost has really come down in recent years.”