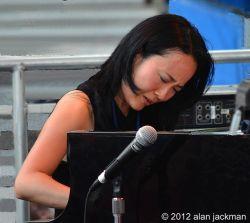 Astaire and Rogers; Bogart and Bacall; Sponge Bob and Patrick…The entertainment world is full of classic pairings. Wednesday night’s classic pairing was jazz and craft beer. Dropped in the middle of the 2014 Craft Brewers Conference in Denver, pianist Helen Sung, affiliated with North Coast Brewing Company, put together a virtuoso quintet to match the virtuoso beer on tap.

The confluence of the Craft Brewers Conference and Helen Sung at the same time in Denver created the obvious opportunity to match jazz and beer. North Coast Brewing provided the beer and Sung put together a cracker jack group. The geographically diverse band included Jaleel Shaw on sax and Donald Edwards on drums: both from New York and locals Ron Miles on trumpet and Greg Garrison on bass.

The program drew heavily from Sung’s recent album Anthem for a New Day (Concord, 2014). The new album includes a mix of Sung’s original compositions and standards that she heavily rearranged. The first set began with Sung’s “Brother Thelonious” which she also re-recorded for her new disc. Sung studied classical piano for years before making the switch to jazz. Her classical background came to the forefront early in the show with her cover of Chick Corea’s “Armando’s Rhumba.” The album version is a duet with Paquito D’Rivera on clarinet. Wednesday night, Shaw filled the woodwind slot while Sung’s playing sounded like a jazzed up sonatina.

While slightly tentative at first, the pick-up band quickly hit the groove and played like a unified group throughout the evening. Garrison and Douglas locked in and maintained a solid foundation. Sung allowed ample time for each member to solo on most of the tunes. Miles is a musical chameleon, comfortable in a wide array of settings, and fit right in here, both in the ensemble playing and with his inventive yet very much in context solos. Shaw, like Miles, has several CDs under his own name as a leader and he, too, fit right into the program deftly executing Sung’s arrangements and passionately improvising when called on. Sung’s own solos displayed a breathtaking technical proficiency, no doubt engrained from her many years of classical training. However, at the same time, she incorporated jazz ideas and phrasing and kept it swinging.

An interesting song choice was the tune “Blue Moon.” Normally, inclusion of that song in the set list would be unremarkable, but because the show was part of the Craft Brewers Conference, it was truly ironic. Blue Moon is the name of a product of the Coors Brewing Company, and industrial brewer and the antithesis of craft brewing. But Blue Moon bottles omit the Coors name, apparently in an attempt to look like a micro-brew. The craft brewers in attendance took it in stride, however, and continued to sip the real craft beer being served.

A highlight of the evening was Sung’s arrangement of Monk’s “Epistrophy.” She kept most of the song’s theme, but dropped the last phrase which resulted in some musical tension. It was like listening to someone speak who wouldn’t quite finish a sentence, leaving your mind to fill in the blank. Another excellent cover was “Never Let Me Go.” That’s one of those songs that has been recorded so many times, a new version must have something different otherwise there would seem to be little point in yet another version of the same thing. Sung met the challenge with an arrangement that highlighted the beautiful melody and provided new insights all at the same time.

“Chaos Theory” was a Sung original and, as the name implied, sometimes drifted outside the typical boundaries of rhythm, time, melody and harmony. The song alternated between the chaotic, as the title described and more organized ensemble playing. On this one, Sung’s playing reached further out as well, at times striking a dissonant sound similar to Don Pullen.

Chaos, however, was nowhere to be found in the beer glasses. North Coast supplied the beer for the evening with Brother Thelonious taking center stage. Brother Thelonious, by the way, is dark in color, but has that classic Belgian taste (maybe a hint of clove?); and smooth as silk pajamas. Beer and jazz; perfect for swingin’ and swiggin’.