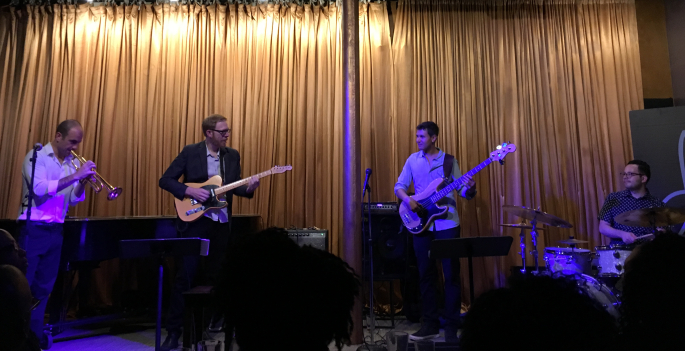 FreeBear is a duo accompanied by guest players. The duo, consisting of Patrick McDevitt on bass and Alejandro Castaño on drums, were joined this evening by guest players Gabe Mervine on trumpet and Steve Kovalcheck on guitar. Kovalcheck and Mervine flashed their fine-tuned skills, performing in a free and relaxed manner throughout the set. But, like any master musician, it looked like a walk in the park. Kovalcheck was particularly adept at the blues and Mervine played around with pedals that warped his trumpet into the electronic age.

If Stevie Ray Vaughan, Hendrix, and B.B. King got together and created a golem guitarist, it would be Kovalcheck. He has a pastiche sound that is his own. In the FreeBear original, Watchie, Kovalcheck’s blues weren’t thrashing and wailing, yelling woes to the world. Instead, he used the form to express his personality and ideas through his highly trained, gentle fingers. On his buff colored guitar, he revealed a soft touch.

Mervine often plays in a style that is reminiscent of Dizzy Gillespie, but tonight his trumpet conjured up images of Chuck Mangione’s flugelhorn. During FreeBear’s untitled song inspired by the Edwin Hawkins Singers’ Oh Happy Day, I kept thinking about Mangione’s character in King of the Hill, mincing his way down the aisles of the Mega Lo Mart, jamming on his flugelhorn.

When Mervine wasn’t executing a bouncy style he was creating odd, and at times intricate, patterns with his pedals using reverb and a machine that turned his trumpet into a simulacra of an old, room sized, Moog synthesizer.

The two permanent, and young, members of the group, Patrick McDevitt and Alejandro Castaño, afforded their two guest artists the opportunity to fall into a groove. The group gracefully hit all of their marks, never stepping on each other’s toes during the set. It was the core of the group, Castaño and McDevitt, that held together this open, flowing, fragile, environment.

Castaño is a drumming machine. Whether working his way through a straight-ahead rock-beat in their song inspired by Oh Happy Day, a ska beat in The Way You Make Me Feel by Michael Jackson, or a funk beat in Watchie, he was error free and accommodating to occasional mistakes made by the other musicians.

McDevitt on electric bass had a broad and friendly grin on his face throughout the night. He looked like he was enjoying every minute, relishing particularly the moments when he and Castaño acted as one organism responsible for shaping and directing each piece of music. He imbued his electric bass with upbeat optimism. While serving as a key structural support, he plucked, thwacked, and strummed his way through each song.

FreeBear’s guests, Steve Kovalcheck and Gabe Mervine played with skill and aplomb, wowing the audience into boisterous applause multiple times per song, but the real stars of the night were Patrick McDevitt and Alejandro Castaño, the young men who are FreeBear. Without their organic chemistry and willingness to lift other players into a space free of ego, there would be no hoots, hollers, and whistles from the audience. Whomever they host next time will surely also be supported and free to soak in the applause.