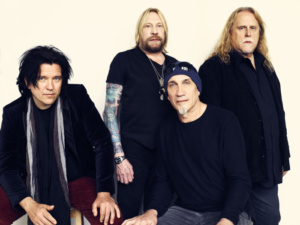 Last year’s Gov’t Mule show at Red Rocks was always going to be hard to beat. To recap: Mule leader, Warren Haynes started the show with a 30 minute solo set playing several songs from his Ashes and Dust album (Nonesuch, 2017) plus a few others. That was followed by a standard 75 minute Mule set. The real zinger was what followed: two and a half hours of Dark Side of the Mule; an extended set of Pink Floyd covers with an augmented band. That was about 4 ½ hours of Haynes on stage.

This year’s show was a little more modest, but still an excellent evening of mulishness on the rocks and under the stars. The opening 75 minute set was followed by an extended 105 minute second set. That one included several songs commemorating the 50th anniversary of Woodstock which was happening that weekend. The second set started with “Jingo” from the first Santana album. The Deitch family were guests on percussion to elevate that section of the band to Santana levels. Adam Deitch, drummer for Lettuce, is a Denver resident and he brought along Bobby, who looked like his brother and Denise, who looked like his mom. Denise worked the cowbell, Bobby played the timbales and Adam handled the congas. The three returned later in the set for “Kind of Bird,” a latter-day Allman Brothers cover which was one of those Mule excursions to various far off lands including vintage Allman Brothers with a tease from “In Memory of Elizabeth Reed” and then the camp and kitsch of the Turtles’ “Happy Together.”

The other Woodstock salutes went to The Who with “Eyesight to the Blind” from Tommy (Decca, 1969) and Jimi Hendrix with “Voodoo Chile (Slight Return).” For the latter, Haynes ditched his trusty Gibson guitars and picked up Hendrix’ favorite axe, the Stratocaster. As a Gibson man, this demonstrated his determination to deliver an authentic cover. However, he didn’t go so far as to play it left handed.

The only downside of last year’s show was the mere 75 minutes of Mule tunes. There are so many great ones out there, a paltry hour and 15 minutes just didn’t seem like enough. This year’s show made up for that. Other than the Woodstock covers, we heard two Allman Brothers covers, the aforementioned “Kind of Bird” and, early on, “Dreams.” “Traveling Tune” which both opened the first set and closed the second set (before the encore), is technically a Warren Haynes tune from his solo Ashes and Dust (Concord, 2015) album, but why be technical?

The band has continued to expand its palette. The first rendition of “Traveling Tune” is a good example. In the history of the Mule, Haynes has been the singer (except maybe during one of those frequent guest appearances by one of Haynes’ many friends). “Traveling Tune” this time around featured THREE part vocal harmony! Keyboardist Danny Lewis and bassist Jorgen Carlsson each added their vocals to the tune, a feat not repeated the entire night, but a unique accoutrement nonetheless. Later in the tune, Lewis on keys, matched Haynes’ guitar with a harmony lead line reminiscent of the Allmans.

Speaking of Lewis, his influence continues to expand. Originally hired as a keyboard player to take the Mule from its original trio format to a quartet, he, at first, hung back behind the keyboards and merely added some B-3 growls and occasional chords. After a few years, he began to strap on a guitar for a few tunes and walk out from behind the keyboard fortress. Then, he added a valve trombone and more and more keyboard solos.

Sunday night, Lewis was more active than ever. Haynes gave him the nod to play several solos and when that wasn’t happening, he continually added fillers, filigrees and even the occasional filibuster. During the extended “Kind of Bird,” he played his trombone with one hand and his keyboards with the other. During another segment, he played a solo on keys and scat-sang the same notes simultaneously. And he went a few rounds with a guitar as well. Certainly, Warren Haynes is the man in the mule, but Lewis’ increasing activity adds another level of interest.