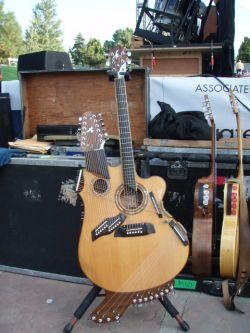 The Group is back. Sort of. For virtually his entire career, Pat Metheny has bounced back and forth between the highly successful Pat Metheny Group and a wide array of projects under his own name. Ever since the Group’s eponymous 1978 release, the personnel in the Pat Metheny Group constantly evolved. Besides Metheny, however, one player remained constant: keyboard player Lyle Mays; i.e.: no Mays, no PMG. The last Pat Metheny Group album was The Way Up from 2005. Mays and Metheny haven’t recorded together since.

Now the Pat Metheny Unity Group has recorded a new album, Kin () (Nonesuch, 2014) and the Group is currently on tour. Friday night, the Unity Group paid a visit to Denver’s Paramount Theater for a two and a half hour show. As he has in the past, Metheny incorporated many instruments, contraptions, songs and techniques from throughout his career, which now spans a good 40 years.

The show started with Metheny on his custom built 42 string Pikasso guitar. The guitar has four sets of strings crisscrossing the body and two necks. Metheny used all 42 strings, often plucking several with his right hand while playing a bass line with his left hand on the longest neck. As if 42 strings just weren’t enough, had tapped on the body (in one of the few places not crossed by strings) several times to add some percussion flourishes.

Next, Metheny brought the Unity Band to the stage: drummer Antonio Sanchez, bassist Ben Williams and reedman Chris Potter. The quartet played the first three tracks from their 2012 CD Pat Metheny Unity Band (Nonesuch, 2012); “Come and See,” “Roof Dogs” and “New Year.” Compared to the album versions of these songs and even their performance in Denver in 2012, both Metheny’s and Potter’s solos seemed more intense and urgent. They followed those songs up with “James” from the PMG album Offramp (ECM, 1981).

At that point, Metheny took to the microphone and explained the situation. He said that they were “kind of their own warm up act.” He explained that this was the quartet that recorded the Unity Band album couple years ago and followed it up with a tour, including a stop in Denver in September 2012. They enjoyed it so much they thought they should do some more but, of course, Metheny, being the restless musical soul he is, thought they needed to change things up a little bit. He decided to expand the band and get back a little more toward the old PMG sound. He hired Italian musician Giulio Carmassi to expand the band to a quintet and Metheny wrote a collection of songs more in the PMG vein. The initial result was the Kin () album followed by the current tour. Metheny then introduced Carmassi who settled in behind the grand piano. The unspoken implication was that with the addition of a piano player, the Unity Band became the Unity Group.

On the new album, Carmassi is credited with playing 13 different instruments (including whistling). Friday night, the piano was set up behind the drums without its own riser making Carmassi nearly invisible from seats on the floor of the theater. I had been looking forward to seeing how many different instruments he would play in concert, but it was extremely difficult to tell with his obscure positioning. Mostly, it seemed he played piano and occasionally added some wordless vocals.

The second part of the concert also saw the introduction of the orchestrion. The orchestrion is a robotic musical contraption Metheny created a few years ago to allow him to be a one man band. Metheny described it as a collection of robotic instruments and he confessed that its creation and his use of it proved once and for all, “that I really am weird.” Several years ago he toured with the orchestrion and no other musicians. He played the Paramount Theater on that tour and the full sized orchestrion filled the entire stage. One of the many great things about the orchestrion is that it is modular allowing Metheny to select bits and pieces to suit his needs for a particular tour. For instance, on the 2012 tour in support of the Unity Band album, he brought along only a few pieces of the orchestrion; parts of the bottle organ and some percussion. On the current tour, Metheny has included about a quarter to a third of the full sized orchestrion. Friday night’s concert included a full size vibraphone with solenoid fired mallets on top, a set of bells, various drums, cymbals and percussive whatnot, an automated accordion and two large pieces of the bottle organ set high on the outer reaches of either side of the stage.

Another great thing about the orchestrion is that it allows Metheny to have an expanded sound without expanding the musicians’ payroll. Some of those savings may be offset by the obvious expense required to assemble and disassemble the machine for each show. Still, the prospect of the orchestrion being involved in a union organizing effort seems slim.

Once Carmassi joined the band (or group) onstage and Metheny fired up the orchestrion, the program turned to material from the new album starting with the title track. The group played several other tunes from the new album including the epic “On Day One” which is the lead track on the new disc. The piece consumed over 15 minutes and included many elements familiar to PMG fans, including an introductory hand-clapping segment reminiscent of “First Circle,” a PMG track from 30 years ago, soaring melodies, climaxes and multiple segments giving the piece the sound of a mini-symphony. Many of the other new songs in this part of the concert incorporated several of these elements as well.

Next, Metheny played a duet with each of his other band mates (except the orchestrion). Perhaps the most compelling was his duet with Williams on bass. The two have been playing together for a couple years now and during that time they have obviously become closely synchronized with what the other is doing or will do in the next moment. Their duet was breath-taking both for the virtuosity of the two players and for the sympathetic interplay between the two. Williams’ playing all night long was a delight. He was able to maintain a transparent tone even while executing intricate passages. Even though an electric bass sat on stage by his side, he stayed with the acoustic bass throughout the evening. He even rosined up his bow a few times for another variation on his great sound.

Potter probably makes the biggest difference in the sound of the Unity Group as compared to the PMG. The Pat Metheny Group never had a full time sax player. Trumpeter Cuong Vu was in the PMG for a short time and occasionally one of the PMG’s multi-instrumentalists picked up a trumpet or flugelhorn or sax but that was typically for some additional texture or coloring, not a focal point of the sound. Last night Potter was front and center for much of the concert. He often doubled the intricate melodies with Metheny and he had many solo slots. He bounced back and forth between bass clarinet, tenor sax, soprano sax and, occasionally, flute. His solos ranged from melodic and thoughtful to intense frenzys, sometimes sounding like Kenny Garrett’s escapades on the alto sax.

Sanchez is the only hold-over from the PMG, being its last drummer. He was a study in smoldering intensity. During his ensemble playing, he used a light touch, but nevertheless seemed to be all over his elaborate drum kit (which included at least 10 cymbals) all at once. Metheny gave him several solos where he only ratcheted up the intensity level, but continued his creative all-over-the-kit playing.

Carmassi spent most of his time in the background, literally and sonically. His duet with Metheny was a highlight. He played piano during that segment and sang the soaring melody from a tune from the PMG back catalog.

Once the duets were complete, the group turned to vintage PMG material including “Have You Heard” from Letter From Home (Geffen, 1989) to close the main set. The group returned for an encore with the ultra-laid-back “Are You Going With Me” from Offramp. Then, as he did for his 2012 concert, Metheny returned to the stage by himself for a second encore. He sat down with an acoustic guitar and reprised some 20th Century favorites in an extended medley including “Phase Dance,” “Minuando (Six Eight)” and “Antonia.”

Metheny, as usual, played one intricate, creative solo after another. He is one of the rare musicians for whom endless ideas pour forth with boundless creativity. Between his playing, compositional skills, band leadership and all around creative efforts, it’s easy to see why he has won so many awards (20 Grammys) and why he was recently voted into the DownBeat Hall of Fame as its youngest member ever and only fourth guitarist along with Django Reinhardt, Charlie Christian and Wes Montgomery. 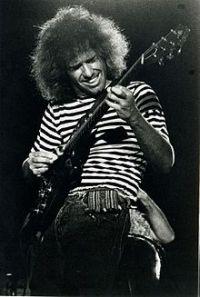 In addition to including a piano player and the sound of the music itself, perhaps the single most important signal that the Group is back was Metheny’s choice of wardrobe. As he did throughout the many decades of the PMG, Friday night, he wore a striped shirt.