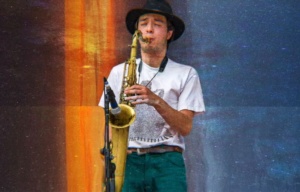 Pianist Dave Kikoski has been playing and recording since the mid-1980s, and the list of musicians he has played with reads like a Who’s-Who of jazz: Roy Haynes, the Brecker brothers, Red Rodney, Ron Carter, Al Foster, Roy Hargrove, Kenny Garret, Dave Holland, Christian McBride, Jon Patitucci, among many others. He has played on more than 100 records, including 14 under his own name.

Guitarist Max Light has performed and recorded with Noah Preminger, Donny McCaslin, Jason Palmer, John Ellis, Dan Weiss, Colin Stranahan, Adam Deitch, Kevin Sun, and Bobby Watson, among others. He is a regular collaborator with Downbeat Rising Star tenor saxophonist Noah Preminger, and the two of them have a duo album, titled Song We Love, coming out in early 2022, and he appeared on Preminger’s albums Genuinity and Contemptment alongside Kim Cass and Dan Weiss. This quartet is set to tour Europe in fall 2021.

In 2019, Dezron Douglas was the Downbeat critics poll choice for Rising Star Bassist. He has released six albums as a leader, is a regular member of the Ravi Coltrane Quartet, and recently joined the Trey Anastasio Band. As a sideman, he has recorded with such artists as Cyrus Chestnut, Michael Carvin, Louis Hayes, Steve Davis, George Cables, and many others.

Hailed by The New York Times as one of the top five jazz drummers, Dan Weiss has been pushing musical limits for decades with his innovative drumming and forward-thinking compositions. With Jacob Sacks and Thomas Morgan, he leads a trio that has released three records, and Weiss also leads a unique sixteen-piece large ensemble that includes some of NYC’s most gifted musicians. As a sideman, he has played/toured with Lee Konitz, Chris Potter, Noah Preminger, Kenny Werner, Rudresh Mahanthappa, David Binney, John Zorn, and many others. Further, he also has been studying tabla for twenty-five years and has performed with several leading Indian musicians.

Rico Jones is steadily becoming one of the top young saxophonists of his generation. In the words of acclaimed saxophonist Vincent Herring, “Rico Is one of the few original voices emerging. His musicianship and passion have forged an original voice.” Raised in Denver, he studied at Denver School of the Arts under Dave Hammond and with the Colorado Conservatory for Jazz Arts (CCJA) with the guidance of such local artists as Paul Romaine, Greg Gisbert, Eric Gunnison, Art Lande, Brad Goode, and Vlad Girshevich.

He headed for New York City for his undergraduate and graduate works at the Manhattan School of Music, where he has earned a remarkable six Downbeat student awards. While in New York, he has performed with such notable artists as Jeff “Tain” Watts, Matt Clohesy, Yasushi Nakimura, Ari Hoenig, Lage Lund, Kush Abaday, Joe Martin, Colin Stranahan, Rick Rosato, Rich Perry, Steven Feifke, Dave Kikoski, and many others.