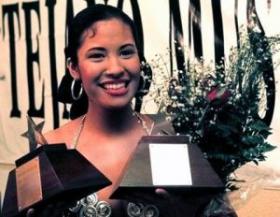 Tune in to Cancion Mexicana on Sunday between 10am and 1pm when Danny Valenzuela celebrates the life and music of Selena, who died 19 years ago on March 31, 1995.

Selena was an idol and heartthrob on both sides of the border. “The Queen of Tejano Music” sold more than 60 million albums worldwide. She was named the “top Latin artist of the ’90s” and “Best selling Latin artist of the decade” by Billboard for her fourteen top-ten singles in the Top Latin Songs chart, including seven number-one hits. Selena had the most successful singles of 1994 and 1995, “Amor Prohibido” and “No Me Queda Más”. Selena released her first album, Selena y Los Dinos, at the age of twelve. She won Female Vocalist of the Year at the 1987 Tejano Music Awards and landed a recording contract with EMI a few years later. Her fame grew throughout the early 1990s, especially in Spanish-speaking countries, and she had begun recording in English as well.