Mark Elf is a gifted guitarist who early in his career played in the band led by “The Mighty Burner”-Charles Earland as well as other leading organ players; Jimmy McGriff and Richard “Groove” Holmes. During the 1970s he also played with NEA Jazz Master Lou Donaldson and Grachan Moncur III which helped him hone his skills leading him to play with other giants of jazz, Jon Hendricks,  The Heath Brothers and yet another NEA Jazz Master, Benny Golson among many others. Finally in 1993 he released his first recording as a leader, The Mark Elf Trio which peaked at the #7 position on the jazz chart, almost unheard of for a new artist, this began an amazing run of radio success. In 1995 Mark founded his own record label, Jen Bay Jazz Records, for which he released 10 CDs from 1996 to 2006, amazingly, 9 of them went to the top, the number 1 slot, an unmatched accomplishment!  After 8 years of silence Mark Elf is back, sounding better than ever with Returns 2014.

Since 2006, Mark has gone through many trials and tribulations; his new recording reflects some of those experiences. Mr. Elf lost both of his sisters and dedicated to each of them a song he composed on Returns 2014, Michelle’s Mambo and Jacky’s Jaunt, respectively.  Also on the latest album is another original, The Sandy Effect which is about Hurricane Sandy that devastated Mark and his family’s Long Island home, two years later they are still trying to recover and repair their home. For his new CD, Mark opted to play the rarely heard baritone guitar on 2 tracks; Low Blow and The Bottom Line. For the 2 baritone guitar songs Mark was not content just playing an off the shelf model, he ordered the parts and had his personal luthier custom make it to Elf’s specifications. Mark is accompanied by some talented musicians, pianist David Hazeltine, bassist Peter Washington and drummer Lewis Nash with guest Steven Kroon adding some hand percussion on 1 track-Michelle’s Mambo.

It is a good feeling to have received a new CD by Mark Elf; it had been way too long a wait! Considering all that Mark has endured since his previous recording, it has been well worth it, especially to hear he’s right back to where he had left off all those years ago. I predict that Returns 2014 will match his previous successes and climb into the Top Ten of the jazz chart if not be another #1 hit! 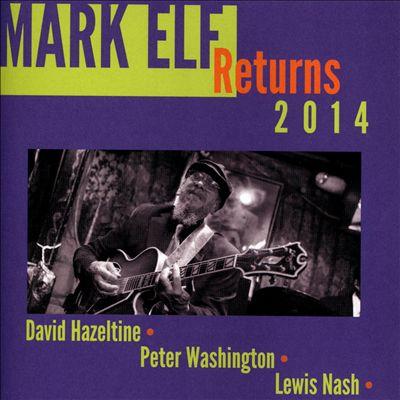