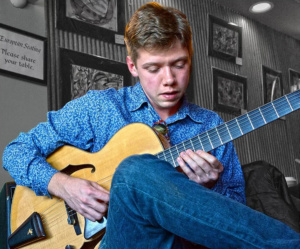 This young man is HOT. Which is odd, because, when Alex Heffron started guitar lessons in elementary school, he was no standout, by his own admission. His first year of lessons were group lessons given via a VH1 music program that gave group lessons to elementary schoolers. The class was extremely slow and they learned very little. Fortunately, these first lessons didn’t kill Alex’ enthusiasm.

After that, it’s amazing how quickly things changed. In 6th grade, he discovered electric guitar and rock music. Shortly after, he began studying at School of Rock. Through the School of Rock he was able to perform the music of AC/DC, Led Zeppelin, Iron Maiden, Judas Preist, The Who, and Talking Heads in venues all over Denver. He credits Brian Hopp at School of Rock for leading him to jazz, by showing Alex parallels between metal and jazz.

He and his middle-school friends put together a band that played in dive bars all over, while still in middle school. By the time Alex was in 7th grade, he had his first gig, at Cervantes! This was his first experience writing his own music and gave insight into what the experience of being in a band is like.

His family, in particular an aunt and uncle who were opera singers, encouraged his interest. At this early age, of course, their advice about how to study was opposed.

Denver’s School of the Arts began a guitar program just in time for Alex. During his studies there, he realized that his aunt and uncle actually knew what they were talking about! By his sophomore year Alex knew he would want to be a professional musician.

Alex went on to the University of Colorado at Boulder, earning a Bachelor of Music, specializing in jazz guitar. He studied in college with Dave Corbus. In high school he studied with Sean McGowan. He has worked with Jonathan Kreisburg, Dale Bruning, Art Lande. In CCJA, he had the good fortune to learn from Mark Simon, Eric Gunnison, and Ken Walker. Heck, no wonder he’s become someone we’re all talking about here in Denver.

I’ve been talking with a number of musicians and educated jazz listeners about Alex, and the perception is quite universal—he has gone from being a fine guitarist a few years ago to being a phenomenon by age 23. I asked Alex to what he would attribute this rapid change. He feels he grew a lot by being out of school and processing what he learned, having more time to practice, and having the opportunity to play with very senior jazz musicians. He was one of KUVO’s featured musicians 6 years ago in our “30 under 30” series. Well, he’s still not nearly 30, but you have to wonder how he’ll play when he gets to be 30, or 40, or more.

Currently, he is actively playing with the Gonzalo Teppa Quintet, Free Bear, Joe Smith and the Spicy Pickles and with Gabriel Mervine weekly at Spangalang until Covid brought that gig to a screeching halt. He is an active composer and is leading his own band which blends the tradition and the current trends in jazz. He has played all over the country and at festivals like the Five Points Jazz Festival, Telluride Jazz Festival, Boulder Jazz and Arts Festival and many more. In April, 2020, his first CD under his own name was released. The album consists of all original music. Alex teaches privately, with CCJA, Denver School of the Arts as well as Kent Denver’s summer classes.

I asked him what his dream would be for himself in 10 years. He’d like to have Denver as his home base while traveling internationally, after thriving in New York. He would be teaching master classes and play with his heroes. Some of his heroes include Marcus Gilmore, Ari Hoenig, Herbie Hancock, Chris Potter, Tigran Hamasyan, and Bill Stewart. Some guitar heroes are George Benson, Wes Montgomery, Grant Green, Jonathan Kreisberg, Kurt Rosenwinkel.

This young man can have it all. Keep his name in mind! He is clearly on his way!