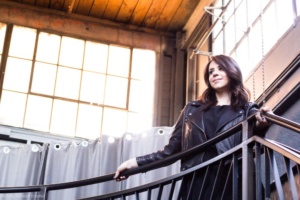 Here in metro Denver, if you say the name Annie Booth to any jazz listener, you’ll get a smile. She is talented to the max and loved by anyone who has seen her in a live performance. I talked with Annie recently and explored what makes this so.

Native to the area, she came through our schools, including the music programs they offered. Her high school jazz band was limited in many ways, and, like many young piano students, she quit her lessons at some point.

Yet, her family’s musicality and love for jazz kept her interest up. But the transformative moment came when she became involved in CCJA (Colorado Conservatory for the Jazz Arts), the program for middle school and high school students that exposes them to our top jazz talent and gives them the chance to play and explore jazz with other students. That’s when the fire was lit!

Lessons then resumed. With Paul Snell as her teacher, she learned jazz, harmony, and voicing. The experience with CCJA gave our shy adolescent the chance to try out her wings and develop into readiness to go on to study music in college.

Annie went on to the University of Colorado at Boulder and achieved her degree in music. She will be awarded her master’s this spring. Her college years were great for jazz, though there was some struggle as she had to study classical music among others more immersed in classical. When we talk about her current projects, you’ll see how well she survived the experience! But her jazz instruction came from Brad Goode, John Gunther, Jeff Jenkins, and Paul McKee. What a great foundation for an upcoming jazz musician.

Annie’s first album, Wanderlust, was recorded in 2014 with Matt Smiley, Alejandro Castano, and Josh Quinlan. Her second is a holiday-themed album with songs arranged beautifully by Annie. Another is called Abundance, headed by the Annie Booth Sextet, consisting of all her own compositions recorded in front of a live audience with John Gunther, Greg Gisbert, Josh Quinlan, Alejandro Costano, and Patrick McDevitt. She generously gave me a copy of this album and I love it. Get out there and buy it!! One of the tunes on it is called “Jolly Beach,” for which she also created a big band chart. This chart won an award at this year’s JEN (Jazz Educator’s Network) conference when it was played by the Navy Commodores.

Speaking of awards, Annie won ASCAP’s Young Jazz Composers Award, was twice awarded Westword Magazine’s “Best in Denver” in the jazz genre, and was featured in KUVO’s Thirty Under Thirty series just a few years ago. 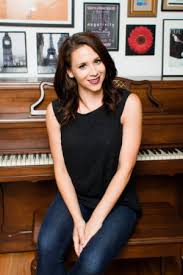 Annie studied French language and literature as well as music. In 2018 she premiered a piece called “Flowers of Evil,” which is a multi-movement suite she composed based on the beautifully dark poetry of 19th-century French poet, Charles Baudelaire. She put together a Chamber Jazz Ensemble with Kathryn Radakovich singing soprano, several of our best jazz musicians, plus violin and a cello. Annie conducted and played piano. The piece lives between the boundaries of jazz, chamber music, and art song.

She began composing the piece when she was a Musician-In-Residence at the Banff Centre for Arts and Creativity in Banff, Alberta, Canada in 2017, when she was just 27 years old. The position there had to be applied for, and she was selected to participate. She was awarded a Pathways to Jazz grant and will be recording this work this year.

If that’s not enough, Annie had an 18-piece big band going that was in residence at the Mercury Café for some time.

You can also find the Annie Booth Trio at gigs in and around Denver. The trio is Annie, Alejandro Costano, and Patrick McDevitt. These three met 10+ years ago at CCJA and a fast friendship developed. Annie says she would not be where she is today without having grown with these two and CCJA.

I asked where Annie sees herself in 10 years. She has clearly been moving strongly toward more composition, though she expects to always perform. She also wants to continue as a mentor to young women musicians, as jazz women are clearly living in a man’s world and need a place to stretch themselves. In fact, while Annie continues her involvement in CCJA (first in an admin role, now in a teaching role) she has created a program there just for women that she calls She Bop. In that project, she had a jam session that actually included women age 10 to 66. It is important to Annie to continue to be a role model for women musicians. Lucky gals! Lucky us, to have Annie Booth among us!