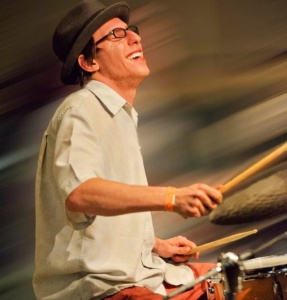 Braxton (“BK”) Kahn is some kind of interesting guy! I met with him for about 90 minutes and came to appreciate the young man as well as his gifted drumming.

The first thing to tell is that he made a point of wanting this Spotlight to include a “shout-out” to the community of musicians and listeners. He appreciates so much the support that flows from the musicians, the venues, the listeners, and KUVO. He recognizes that Denver is special in that regard.

BK must have been born a drummer, since he was banging on pots and pans as early as the age of three. Yes, many toddlers do that, but BK kept on banging until at the age of 7 his parents got him a drum set and started him on lessons. He also made a point to say he has always had great support from his folks.

Lessons continued, and BK and his twin brother played music together and recorded themselves by the time they were 8 and 10 years old. During junior high school there was a bit of a lull since there were no band opportunities there for him. But he did attend rock band camps in the summers during middle school.

Growing up in Boulder, he attended Fairview High School, where there was a great jazz band which really brought him along. The band director was Travis Keller.

His development continued with CCJA under Paul Romaine; and ultimately BK graduated from CU in 2016. He was fortunate to have the chance to study with Brad Goode there. At CU, he actually was one of just two students in his group his freshman year. The other was Alwyn Robinson, who was starting his master’s program. BK feels Alwyn set the bar high and was a significant influence in his progress.

In 2013, while still a student in college, he was part of Bob Montgomery’s Telluride All Stars along with Anisha Rush, Alex Heffron, Rico Jones, Miles Lujan, Dan Montgomery, and Walter Gorra on piano. Rather heady company in Denver’s young musician scene! In 2015, he was one of KUVO’s “30 Under 30” honorees.

BK enjoyed telling of his connection to Paquito D’Rivera. Walter Gorra managed to bring him to CU and BK played with Paquito both at KUVO’s Phyllis A. Greer studio and at a concert at Mt. Vernon Country Club.

So who is BK today? He’s a fine drummer who prides himself on being an in-demand side man. “I know my role.” He has no big interest in heading up a group but consistently gets calls to back others up. He’s a full-time musician who does some writing and spends time rehearsing for these gigs he’s invited to. He does have a trio sometimes called The Braxton Kahn Trio, made of friends he made years ago, but they generally function as a working rhythm section. On guitar is Alex Heffron; on bass Hunter Roberts. They add Anisha Rush on sax sometimes and as a foursome they expect to go into the studio and record under the group name Pursuance. This group has played at KUVO in the Phyllis A. Greer studio. I was there and loved them!

Bands he works with currently include ManyColors (hip-hop and jazz fusion) and for four years has been a drummer with Joe Smith and the Spicy Pickles.

When I asked what musicians he admires, among others he said Paul Simon and Joni Mitchell for their writing. BK writes lyrics and poetry. This led to my learning of his spirituality. He believes music connects him to the larger universe. He practices Soka Gakkai, a form of Buddhism that includes chanting, which he feels helps give him self-actualization.

Of course, I had to ask about his hat. He can usually be seen in an old fedora. Turns out it belonged to his grandfather, and it fits BK perfectly.

For the future, he’d like more opportunity to travel and would love to tour Europe and Japan some day.

BK can often be seen  in the house bands at Meadowlark and at Herbs jam sessions. And on March 7 and 27, he’ll be backing up Greg Gisbert at the Crimson room. Get out to hear BK!!