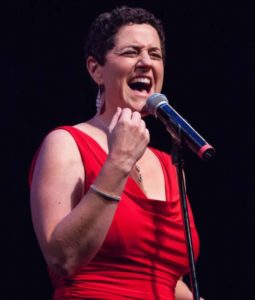 Heidi Schmidt is a top-notch jazz singer in Denver. Promotion materials about Heidi say she has danced with gypsies, shared coffee with Bedouin, sipped tea in the House of Lords, sung jazz for Transylvanian Franciscan monks. This sounded awfully exciting, and I just had to meet this singer.

I met Heidi in Tattered Cover on the 16th Street Mall and found a delightful, down-to-earth gal who it was totally comfortable to be with. And yet, what a life! Her life led her to where she is today, but definitely not in a straight line!

Born in Colorado, where she still has extended family, at age 8 her core family was moved to Saudi Arabia, where her father worked for the US Geological Survey. From the age of 8 to 15, Heidi was immersed in the strict Saudi society where females were at best second-class citizens. Like Saudi females, her mother was not allowed to drive, but the government provided a private driver. Heidi recalls routinely seeing scenes such as a father driving a pick-up truck with his son beside him. The wife and mother would be in the back of the pickup with the goats. One can only imagine how this would affect an American girl in her most formative years.

Fortunately, Heidi attended an international school where she participated in the school choir, singing standard repertoire. At this time, she had no idea she had a voice that would develop into something quite special. Her strength was in the oboe.

When she was about 11, the family did a tour that followed the railroad route of Lawrence of Arabia. They came upon a bedouin camp and were invited for coffee (cardamom laced), which little Heidi enjoyed. The bedouin gave her a pair of earrings which she still has. Heidi was struck by the fact that the earrings didn’t quite match. The bedouin believe only Allah is perfect, so whatever they hand craft must be imperfect.

The international school in Saudi Arabia only went to 9th grade, so Heidi was sent to an American boarding school, the Interlocken Arts Academy in Michigan, where she began seriously studying the oboe. She also acquired a guitar and discovered her individual singing voice. She switched to studying classical guitar and opera to develop her voice. After a year, she actually saw an opera and knew this was not for her. But in the meantime, she began attending concerts and discovered Ella Fitzgerald’s music. This was a pivotal time for our future singer.

But off she goes in yet another direction. Sort of. After high school graduation, she wanted to reach outside herself and serve others. A foundation associated with her church was working in Romania, and Heidi joined their program to help uplift a people left devastated by communism through caring for orphans, widows and the poor.

For over 8 years in Romania, she worked with the foundation teaching music and some English. (Yes, she was invited to weddings where she “danced with gypsies,” more appropriately identified as Roma.) Eventually, she wanted to sing more and met a radio person who listened to her and invited her to sing folk music at various festivals. She was discovered by a producer who encouraged her. She cut her first CD. Ultimately, she sang her own compositions all over Romania plus Germany, Holland, Norway, and on. She grew in her love for jazz during those years touring Western Europe.

It was jazz that brought Heidi home to Denver. She chose to continue her music education by attending Lamont School of Music, where she earned her Bachelor’s degree with a double major of music and international studies.

Today, she sings with the Colorado Jazz Repertory Orchestra and with a group called Nice Work, which was broadcast from the Phyllis A. Greer performance studio. She and Wil Swindler are developing a group called Schmidt & Swindler Quintet. She sings at Caffe Sole, the St. Julien, Nissi’s, the Boulderado, the Muse, and at private events. At CU Denver, she is teaching individual lessons and directing a vocal ensemble. She is on the faculty at Red Rocks Community College and is the choral director at her church.

Heidi Schmidt is a delight to listen to in any setting. You can hear her on the Nice Work Jazz Combo CD “Pathways Session” and on two recordings with the CJRO. Watch for her and get out there to listen!