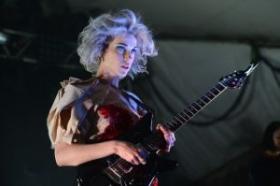 Some key facts about St. Vincent:

2. Her real name is Annie Clark.

3. She’s a pretty flipped out chick.

In her concert appearance Saturday night, she displayed a wide array of rock styles, focusing mostly on the “Art Rock” or “Progressive Rock” genres. She follows in the path of prior purveyors of this sort of music/performance, Laurie Anderson, Tori Amos, Kate Bush, Peter Gabriel and others. Yet she borrowed from other styles as well.

Clark appeared with a three piece back-up band; Daniel Minsteris on synths, Matt Johnson on drums and Toko Yasuda who doubled on keyboards and guitar and sang harmony. Clark sang and played some remarkable guitar. She used a variety of unusual guitars, but typically favored a highly distorted, sometimes angry sound quite similar to Robert Fripp of King Crimson and occasionally went for a “through a coffee can” sound a la Frank Zappa.

Sometimes her guitar was lost in the mix of synth washes and heavy drums and other times sounded more like organ chords without a sharp pick-on-string attack. Yet other times, her playing came through loud and clear capturing one rock sonic groove after another. More often than not, she sounded somewhat like the Talking Heads. Indeed, she recently recorded an album and toured with David Byrne. Whether he rubbed off on her or whether they came together because of pre-existing mutual affinity is a good subject for a debate.

She also exhibited some of David Byrne’s trademark jerkiness on stage; sort of a robotic aesthetic. Some of her music sounds a little robotic too like Kraftwerk or Devo, for example. One problem with robots, however, is that they are incapable of emotion. At least so far. (See, for example: http://en.wikipedia.org/wiki/Technological_singularity ) Happily, Clark doesn’t dwell exclusively in that neighborhood. A number of her songs are sweetly melodic and for the first song of her encore, she accompanied herself on guitar and sang a beautiful ballad. Other elements and influences seemed to include bands like The The, Deep Purple and Prince.

The theatrics were somewhat spare, but certainly more than your typical blues show. Most obvious was the light show which was frequently synchronized with the music, indicating a fair bit of preplanning and clever effects, but also indicating what is probably a more or less identical show night after night. (This must be some deep seated pro-jam band prejudice on my part.) Often, the lights flashed like a strobe, emphasizing the jerkiness. The stage had a three-level large stair step piece in the center which Clark sometimes climbed to play her guitar from the top or sometimes writhed upon when she got overly sentimental. She and Yasuda also engaged in some light choreography. Often Clark moved about the stage in tiny manic steps almost creating the illusion that she was floating. One of the most obvious visual devices is the fact that she has dyed her hair gray. Since she’s only 31 and had a dark brown mane less than a year ago, I have a sneaking suspicion that she’s making fun of baby boomers who are currently going the other way with their hair color. Or maybe she’s just a flipped out chick.

The opening act was another flipped out chick with a nick name. (Did these two hang out with George W. Bush, who is famous for giving nicknames to all his buddies? Hmm, maybe not.) Noveller is her official stage name, but Sarah Lipstate seems to be her given name. In any event, she also played guitar, but all by herself…herself and her synthesizers and loops. She created layers with her electric guitar which were mostly arrhythmic but occasionally included a subtle beat. Overall, she created an ambient aesthetic reminiscent of Brian Eno.