Tune in to Jazz with Victor Cooper – weekdays from 6-9 a.m. MT – for Stories of Standards to hear our favorite versions of this song all week long Monday, 11/6 thru 11/10!

Tadd Dameron wrote “Lady Bird” in 1939 by and released it in 1948. Also known as Lady Byrd, this was the first of his songs to feature the Tadd Dameron turnaround (Cmaj7 – Ebmaj7 – Abmaj7 – Dbmaj7 in the last two bars). It is also known as “one of the most performed in modern jazz”.

Tadd Dameron (1917-1965) was born in Cleveland, where he formed the foundation of his music with swing in the big bands. In Kansas City he wrote arrangements for Harlan Leonard and His Rockets. He also made the acquaintance of Charlie Parker and moved to New York at the same time as Parker. “Esquire” magazine in 1947 named Dameron Best New Jazz Arranger. His band at that time included Fats Navarro; later he added Clifford Brown. Philly Joe Jones, who roomed with Dameron, said “Whenever he got an idea in his mind, he would just sit down and start writing. He could write out a whole composition just lying on the floor. Once in a while, he would get up and walk over to the piano to check what he had written, and it was always right.” Shy and unimpressed with his own piano skills, he still managed to direct bands with skill and sensitivity. Dexter Gordon (tenor saxophone) called him the “romanticist” of bebop. While drug problems in the late 1950s led to jail time (1959-1961), he recovered and was active until the years before his death of cancer in 1965. 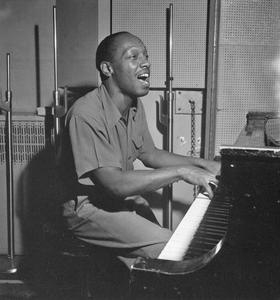