Stories of Standards: “Scrapple From the Apple”

From 1946-1947 Charlie Parker recorded for Dial Records in California; toward the end of that time he was hospitalized at Camarillo State Hospital, then returned to New York, where he continued on the Dial label. He was also recording for Savoy, which resulted in the November 14, 1947 recording of “Scrapple From the Apple” appearing on both labels. The F Major (AABA form) “Scrapple from the Apple” melody begins as a progression based on “Honeysuckle Rose” (1929) by Fats Waller, then goes to a variation on George Gershwin’s “I Got Rhythm” (1930).

Despite his regrettably short life Charlie Parker (1920-1955) profoundly influenced the course of jazz. Born in Kansas City, Kansas, Parker left school when 14 years old to hang out with musicians. Within a few years he had played with Earl Hines, Billy Eckstine, Thelonious Monk, and Kenny Clarke. With Dizzy Gillespie he became one of the formative artists of bebop. Marked by extended harmonic progressions, superlative play, and dissonance, bebop marked a shift from jazz for dancers to jazz for listeners. While it had followed a steady progression, much of this happened during the 1943-1944 recording strike, creating a tremendous sense of shock for those who first encountered bebop seemingly arrived fully formed with no visible history.

Asked about the origins of his style, Charlie Parker said “l’d been getting bored with the stereotyped changes that were being used all the time at the time, and I kept thinking there’s bound to be something else. I could hear it sometimes but I couldn’t play it. … I found that by using the higher intervals of a chord as a melody line and backing them with appropriately related changes I could play the thing I’d been hearing. I came alive.” 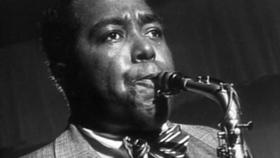