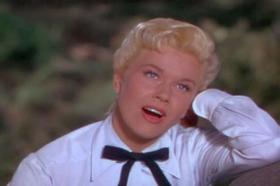 Tune in to Jazz with Victor Cooper – weekdays from 6-9 a.m. MT – for Stories of Standards to hear our favorite versions of this song all week long starting Monday, April 9!

“Secret Love” (1953) was written by Sammy Fain and Paul Francis Webster as the title song for the movie “Calamity Jane”. Doris Day starred and her first take version went to number one on several charts. “Secret Love” subsequently won the Best Original Song Oscar for the 26th Academy Awards. The song has proven popular in the genres of pop, country and western, jazz and R&B.

Sammy Fain (1902-1989) was a self-taught pianist, who played by ear. In 1923 he appeared in an early sound  film by Lee De Forest before becoming a staff pianist and composer for Jack Mill’s publishing company. Fain wrote with Irving Kahal “You Brought a New Kind of Love to Me” (1930) and “Let a Smile Be Your Umbrella” (1927) on which Paul Francis Webster also collaborated. For Broadway Fain and Kahal wrote “I’ll Be Seeing You” (1938). Of Fain’s fifty-plus scores for films in the 1930s through the 1950s, nine were nominated for Best Original Song Oscars and two won – “Secret Love” (1954) and “Love Is a Many-Splendored Thing” (1955). Both Fain and Webster were inducted into the Songwriters Hall of Fame in 1972.

Paul Francis Webster (1907-1984) spent time first as a sailor and then as a dance instructor before beginning his career as a lyricist in 1931. In 1935 he went to Hollywood, became a freelance writer and had his first hit collaborating with Duke Ellington on the 1941 song “I Got It Bad and That Ain’t Good”. From 1950 onwards he worked with Sammy Fain, with whom he won two Academy Awards, then won a third with Johnny Mandel for “The Shadow of Your Smile” (1965) in the movie “The Sandpiper”. In the 1950s he was the most successful songwriter on UK charts.