Tune in to Jazz with Victor Cooper – weekdays from 6-9 a.m. MT – for Stories of Standards to hear our favorite versions of this song all week long starting Monday, December 18!

“The Christmas Song” (1946) by Bob Wells and Mel Tormé was the product of a sizzling hot day in Los Angeles in July of 1945. Tormé had gone over to Wells’ house to visit and found a notebook with a small verse which began “Chestnuts roasting on an open fire”. When asked, Wells said he “thought if he could immerse himself in winter he could cool off”. Tormé saw its possibilities as a song and in less than an hour of collaboration had written the melody, more lyrics and they had the song. First recorded by Nat “King” Cole in early 1946, his second recording later that year added a string section and was a hit on both the pop and R&B charts. The first recording was inducted into the Grammy Hall of Fame in 1974. By 1999 over 1700 versions had been recorded and ASCAP lists it as the number one holiday song of the 21st century.

Mel Tormé (1925-1999) was a child prodigy who began singing when three years old, studied piano and drums, and published his first song when 15 years old, which was recorded by Harry James. He played drums, sang and wrote arrangements in the Chico Marx band starting in 1942. His solo singing career started in 1947 and his 1949 version of “Blue Moon” led to his nickname “The Velvet Fog”. He then went from crooning to scat, and is still considered one of the all-time top three scat performers. He acted in 41 movies and television shows, wrote six books, including an autobiography and maintained his vocal skills until the 1996 stroke from which he died in 1999.

Bob Wells (1922-1998) wrote over 400 songs, with “The Christmas Song” (with Mel Tormé) among the best known. They wrote 150 songs together. Wells worked with Blake Edwards on several films, including “A Shot in the Dark” and “10”. He won four Emmy Awards as producer and head writer of “The Dinah Shore Chevy Show” and two more for ”Shirley MacLaine: If They Could See Me Now”, as well as a 1957 Peabody Award for the “Dinah Shore Chevy Show”. 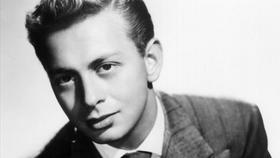