Su Teatro’s ‘Chicanos Sing the Blues” Returns to the Stage

Su Teatro presents Chicanos Sing the Blues, June 9 -26, 2032, as part of Su Teatro’s 50th Anniversary. The Golden Season is a two-year Community Celebration. CSB is a play with music written and directed by Anthony J. Garcia, the project was created and developed by Daniel Valdez and Anthony J Garcia. Corridos, boleros, and torch carrying huapangos intersect with African roots at the corner of blues and ajua.

This is a musically powerful, dance in your seats, till the last teardrop falls, extravaganza.

Ever since Su Teatro was founded in 1971, music has been a part of our storytelling. Chicanos Sing the Blues highlights the musical talents of Su Teatro’s acting company and focuses the story on the music with over thirty songs performed in this musical experience.

The late and great poet master revolutionary Gil Scott Heron said there are at least 500 shades of the blues. There certainly must be a brown blues. Su Teatro explores the corridos, boleros, the oldies, and the bluesiest of the blues while uncovering the legends and roots of Chicano Music. Songs from Mexicana Divas Lola Beltran to Lydia Mendoza; from Chicano Rock n’ Rollers Ritchie Valens to ? and the Mysterians; from Mexicano Musical Godfathers Lalo Guerrero to Jose Alfredo Jimenez; from Tejanos Freddy Fender to Randy Garibay. 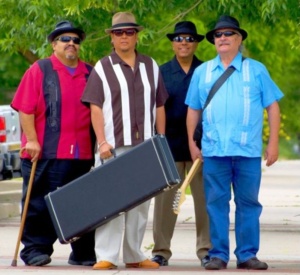 Su Teatro Super Veterano Manuel R. Roybal, Sr. returns to Denver, after moving to New Mexico in 2015. In his role as The Mighty Simon Peter. Simon comes to the crossroads of time, life, love, and the blues, as he is able to reunite with his ole’ blues band Los Cuatro Ciegos de Barrio (The Four Blind Guys of the Neighborhood). They recall the good and the bad of the musical journey that once guided them.

As part of the 50th Anniversary, Su Teatro will continue to honor the veteran actors, this time Manuel will be honored for his over 30 years with the company, on Saturday, June 25, following the performance.