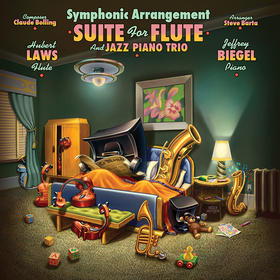 In 1975 pianist and composer Claude Bolling turned the music world on its collective ear when he released Suite for Flute and Jazz Piano. Sales for the album set the all-time pardon the pun, record for consecutive weeks on the Billboard charts with an extraordinary 530 consecutive weeks, single handedly created the new term “crossover” enabling Claude to perform at the Hollywood Bowl and on the Tonight Show starring Johnny Carson as well as influencing countless musicians, among them pianist Steve Barta and flautist Hubert Laws who had been asked to perform the music with him on several occasions. Flash forward over 35 years, Steve Barta now an accomplished and admired composer, arranger, pianist and educator based out of Colorado Springs obtains permission and the blessing of the retired Claude Bolling to recreate his landmark recording to include a symphonic orchestra. Steve recruits Hubert Laws to be his flautist and Jeffrey Biegel to play piano, a pianist Mr. Barta knew was the perfect choice for this session because both had thought of rearranging Bollings’s music for a symphonic orchestra for several years. Hubert Laws is renowned for excelling playing flute in both jazz and classical, besides he played the suite with its creator, Claude Bolling.

Rounding out the jazz quartet are bassist Mike Valerio and drummer Michael Shapiro, add to that a string quartet, an orchestra under the direction of Peter Rotter utilizing the arrangements of Steve Barta and voila! Lightning was captured in the bottle a second time. Not just a mere imitation, Symphonic Arrangement of Suite for Flute and Jazz Piano Trio has a slightly more contemporary approach and sound without losing any of the original, captivating feeling, a most difficult task to achieve. Steve Barta’s arrangement and choices of musicians managed to reach the level of greatness of the first recording. Adding to the authenticity and goal of remaining true to Bolling’s recording, Steve hired the same artist and master designer, Roger Huyssen, who was responsible for the original art work to create a similar portrait for the follow up. Like with all others involved in this remarkable project, Roger exceeded expectations. When Claude Bolling heard the finished recording he commented, “a modern and true arrangement, a thousand bravos for Steve Barta and the crew!” Permit me to add bravo number 1,000 and one!