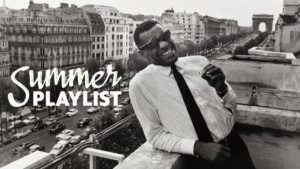 Whatever your plans are for the summer of 2020, it is always better with a soundtrack of summer songs to make staying at home and gathering with close family and friends more enjoyable. Time to sit back and unwind or get up and show off your summertime moves to a playlist created by all of us — including you! Starting this Thursday, June 18 through Thursday, June 25, we are asking you to vote and add your own picks for the Summer Playlist.

What old favorites and new selections will you find on the list? Which songs are you going to add to the list?

From 1968, which version do you prefer, Willie Bobo’s ‘Grazing in the Grass’ or Hugh Masekela’s? Believe me when we tell you that it was just as fun to put together our suggested list of 100, but there are so many more great summer songs! That is why we want your input.

As always, we’ve got the stories behind the songs to share with you as well. Originally released in 1969 ‘Hot Fun in the Summertime’ from Sly and The Family Stone a single released in the wake of the band’s high-profile performance at Woodstock, which greatly expanded their fan base.

Nothing says summer more than ‘One Mint Julep’ by Ray Charles. An intoxicating instrumental version showcasing Brother Ray’s skills on the organ backed up by an all-star big band featuring a Quincy Jones arrangement from 1960. How about being introduced to Orkesta Mendoza’s ‘Paleta,’ this cumbia is heavy with accordion and guitar that makes it as much rock and roll as it is cumbia. A joyful addition to any summer playlist – and one you may just want to vote for.

The voting starts Thursday! Be sure to cast your votes and add your favorites. We look forward to kicking off the 2020 Summer Playlist, starting on Friday, June 26, until the end of the month!

There’s nothing better than a Summer Playlist — made up by friends like you!

Thank you for helping us make the Summer Pledge Drive a Success!