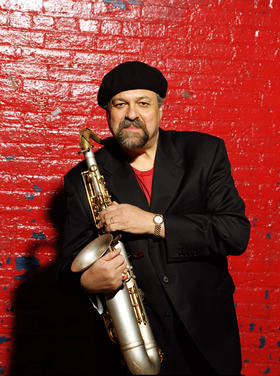 It’s another week that starts and ends on a high musical note. On Thursday, to get things started, the master bassist Eddie Gómez spends his second night at Dazzle, 930 Lincoln, as part of the Girshevich Trio; and on Wednesday, the master saxophonist Joe Lovano wraps up the week with the first of his two nights at Dazzle in the company of his Classic Quartet.

Born in Cleveland, saxophonist Lovano migrated to Boston to attend, as do so many players, Berklee College of Music in the early 1970s. From Berklee, the saxophonist worked in organ trios followed by several years with Woody Herman’s herd. Then he hit New York and was part of the Mel Lewis Big Band and became part of John Scofield’s quartet and a trio with Paul Motion and Bill Frisell, who, of course, grew up in Denver.

In 1985, he released his first album (on the Italian Soul Note label); and five years later, his first album on Blue Note came out. And his varied efforts on Blue Note have kept coming, establishing Lovano as simply one of the premier tenor men on the scene. The last time I caught Lovano, he was at Dazzle with his Us Five group in tow. On Wednesday, he is here with his Classic Quartet. That quartet has an international cast of younger players. There’s Argentine player Leo Genovese, who has frequently worked with Esperanza Spalding, on piano. Peter Slavov, from Bulgaria, on bass. Slavov has also recorded with Lovano’s Us Five group. And there’s Lamy (a.k.a. Bajram) Istrefi Jr. on drums. Istrefi hails from the Republic of Kosovo. The quartet plays on Wednesday at 6 and 8 p.m. (303-839-5100). Lovano and company are also on stage on April 6 at 6:30 and 8:30 p.m.

Returning to the Puerto Rican-born Gómez, the bassist spent more than in decade in pianist Bill Evans Trio and has played in numerous contexts since that time, including the group Steps Ahead. He is simply a great player and his appearance as the featured guest on the new CD Algorithmic Society by the Girshevich Trio (pianist and father Vlad Girshevich and drummer and son Aleks Girshevich). There are times when a special guest on a recording never blends in as an integral part of the session. That’s not the case with Algorithmic Society on the Tapestry label. The trio greatly benefits from Gomez’s presence, but it is a true and impressive trio recording. The group plays at Dazzle on Thursday at 6:30 and 8:30 p.m. to celebrate the new CD.

Additionally, on the weekend between Gómez and Lovano, guitarist Earl Klugh hosts his annual Weekend of Jazz event at the Broadmoor in Colorado Springs. This year, Klugh’s enormously event features the impressive lineup of guitarist George Benson and saxophonist David Sanborn along with Jonathan Butler, Richard Elliot, Kandance Springs and Tom Braxton (844-476-6873 or weekendofjazz.com).

This past week, the band called The Democracy coordinated by trombonist Adam Bartczak celebrated its new CD at Nocturne. On Sunday, the celebration moves to Dazzle where The Democracy plays at 7 p.m. Also at the club on Lincoln, which will be moving to new location before long, the week finds bassist Ken Walker leading his sextet on Friday at 7 and 9 p.m. and pianist Purnell Steen bringing his Le Jazz Machine to the club on Saturday at 7 and 9 p.m. Steen has a solid group of players plus singers Myra Warren and Ed Battle. Also on Tuesday, Dazzle features pianist Steve Denny with a quintet that includes Ken Walker on bass. Denny’s Dazzle connection goes back to when he would book bands for the club. He plays at 7 p.m.