Detour, on Concord Records, is chart-topping jazz/R&B sax player Boney James’ 18th studio album. Appropriately titled, this latest album is a subtle stylistic turn that builds on the commercial success of 2020’s Solid, his highest charting release ever on the pop charts, peaking in the Top 10 on the Billboard 200.

“There are some people who think I’m a legend,” laughs Boney about his status as one of the best-kept secrets in music. “And others who have never heard of me. It’s kind of a nice place to live and play in. I do sense a great deal of positive energy towards the music I’ve been making recently and for that, I’m tremendously grateful.” More on Boney James 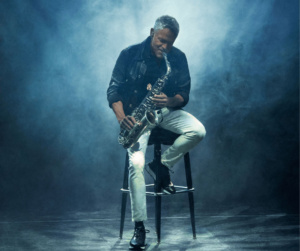 Amid the COVID-19 pandemic, Koz recorded two albums. 2020’s A New Day, released exactly 30 years and one day after his self-titled debut album, was his 20th album overall and first full set of original material in 10 years. It reached the No. 1 position on numerous jazz charts, including iTunes and Amazon. With three back-to-back No. 1 hits on Billboard’s Smooth Jazz Airplay chart – “Side By Side” ft. David Sanborn, “Dr. Norm” ft. Paul Jackson, Jr. and “The Closer We Get” – the album proved to be a smash hit on the radio. Other special guests on A New Day included Brian McKnight, Antwaun Stanley of Vulfpeck, Meshell Ndegeocello, Bob James, Marc Antoine, Rick Braun, Jeff Lorber, and Chris “Big Dog” Davis. Koz broke new ground with his June 2021 release, The Golden Hour. Recorded live in the studio with a large jazz ensemble, the album marked his first full-length collaboration with guitarist/producer/internet sensation Cory Wong.

Born and raised in Los Angeles’ San Fernando Valley, Koz became a professional musician after graduating from college. He immediately found work as a sideman and was subsequently signed to Capitol Records in 1987.  Koz released his self-titled solo debut album in the fall of 1990, followed by a large body of best-selling work, including several Gold-certified albums and numerous Top 5 singles. In 2010, he signed with Concord Records and released the No. 1 Hello Tomorrow. Live at the Blue Note Tokyo, Koz’s first live CD was released by Concord in 2012. He has since topped Billboard’s Current Contemporary Jazz Albums chart with Summer Horns (2013), The 25th of December (2014), Collaborations: 25th Anniversary Collection (2015), Dave Koz and Friends 20th Anniversary Christmas (2017), Summer Horns II From A To Z (2018) and Gifts of the Season (2019). In 2019, Koz also released Live From The Dave Koz Cruise.

Dave has served as global ambassador for the Starlight Children’s Foundation for over 25 years. He founded KOZ Wines in 2009 as another avenue to support the foundation. Dave donates all his proceeds from KOZ Wines to the organization and, with help from his fans, has raised over one million dollars through the Dave Koz and Friends At Sea cruise silent auction.

“Music has been such a blessing to me, and we need it more than ever today,” Koz says about his remarkable career.