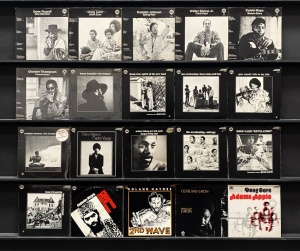 1971 was a bad time to start a new jazz record label. Pop and Rock music ascended to and jazz musicians were having a hard time making a living. But pianist and entrepreneur Gene Russell had a vision, every bit as urgent and contemporary as anything else going on in the U.S. at the time. He wanted to create a space where Black jazz artists, most of whom were far from household names could record their music and reach the wider world. In the same era, Civil Rights leaders such as Martin Luther King, Malcolm X, and the Black Panther Party were leading the cause for justice, liberty, equality, and musical collectives like AACM in Chicago, the Black Artists Group in St. Louis, and the Union of God’s Musicians and Artists Ascension in Los Angeles were working to promote and nurture self-determination and self-expression. This was the culture into which Black Jazz Records came into being.

Its brand spoke announced its presence confidently. All the album covers featured close-ups of the musicians and all were shot in stark black and white, framed in black with the symbol of the soul-brother handshake in the corner, easily setting them apart from other records in stores. Young people don’t have enough history to understand how revolutionary these seemingly small acts were.

Black Jazz Records only had a 4-year run, issued 20 records, and quickly fell out of print. And yet over the years, they became treasured collectors’ items and sampled by discerning DJs and Hip-Hop artists. Thankfully these documents are back in print (a whole story in itself).

The Jazz River offers a look into Black Jazz Records and what made them special on Sunday, June 27, at 5 pm. Only on KUVO Jazz!