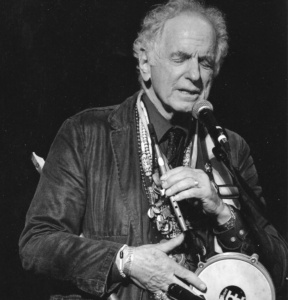 If ever there was person deserving of both the NEA Jazz Master status and a Kennedy Award, and maybe throw in a Presidential Medal of Freedom, it is the now 89-year old David Amram.

Mr. Amram is a composer and arranger who has conducted orchestras, chamber and choral groups. He is also mastered the French horn, piano, guitar and any number of flutes, along with his remarkable free-association raps and scat singing. The staggering array of musicians and artists he has worked with include: Thelonious Monk, Aaron Copland, poet Langston Hughes, Charles Mingus, Bob Dylan, Dizzy Gillespie, Jack Kerouac and Allen Ginsberg, Paquito D’Rivera, playwright Elia Kazan, and Steve Martin. For 40 years, he was the accompanist of Floyd Red Crow Westerman, Dakota Sioux country singer, and actor.

In 1956 Joseph Papp hired him to write the music for 25 productions of the NY Shakespeare Festival. He was composer-in-residence for the New York Philharmonic during the Leonard Bernstein years and . He also has conducted and performed with many symphony orchestras and was part of USIA tours of Brazil, Kenya, Cuba, and the Middle East. He wrote music for a number of critically acclaimed films such as The Manchurian Candidate, as well as several documentaries. And if that isn’t enough he is a farmer, he wrote three autobiographies and is the subject of a documentary: The First 80 Years. He is also a long-time friend and champion of KUVO JAZZ and a regular participant in the annual birthday celebration of Neal Cassidy here in Denver.

Tune in Sunday, October 11, 5-6 pm (rmt) as The Jazz River takes you on an excursion down the David Amram tributaries of jazz, blues, classical, poetry, film scores, and world music.