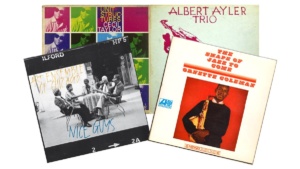 Turn that crap off! It’s just a bunch of noise. Where’s the rhythm? These cats can’t swing and they sound like they just picked up their instruments. This isn’t music. I guess they’re important but it’s just not my thing. These are common complaints about the genre known as Avant-garde or Free Jazz, a style that has been around since the 1950s. Coltrane and Mingus explored it, and it’s had its share of NEA Jazz Masters such as Cecil Taylor, Ornette Coleman, Sun Ra, Anthony Braxton to name just a few.

From its early incarnations, Jazz has been the music of change and of revolution. Swing evolved from Ragtime. Bebop was a radical reaction to Swing. Cool and Modal jazz were radical reactions to the reaction. And Free or Avant-garde jazz was a radical reaction to it all. The term avant-garde meant vanguard, those who went ahead. Artists in art, music, sculpture and even poetry served as vanguards of social progress. They went against traditional ways of seeing the world, broke the rules, challenged the established authority of convention and conformity. The Free Jazz players of the 1950s and 60s fit that bill. This is not to say that they weren’t highly educated and adept at their craft, so much so that they confidently resisted chord progressions, standard forms of head-solo-head and brought a new intensity, new colors and feelings into their playing reflecting the turbulence of the times and the quest for freedom of expression.

On Sunday, January 17, from 5 to 6 pm, journey down The Jazz River as we offer a primer on appreciating Free Jazz in all its sonic and emotional glory. Only on KUVO JAZZ!