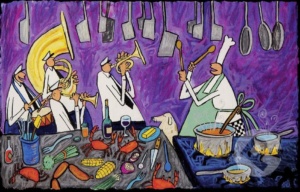 Originally the place was surrounded by swamps and woods, and tucked in were slave cabins as well as small clusters of Indians living there in the late 1700s. Today you can find it behind the French Quarter and inside what is now Louis Armstrong Park in New Orleans. It is a sacred place called Congo Square.

In the early 1800s it was the only place in America where slaves were freely permitted to gather and make music. On Sundays hundreds would gather, drawn by the rhythm of log and hand drums, wooden horns, and chants from forbidden home languages. Unbeknownst to those creating them, their call and response of the beats and voices provided the bedrock of what we know as Jazz and Blues. There in New Orleans, the only place in America that permitted African drums after the Civil War, an original American art form was being born.

Because of its geography, climate and relaxed vibe, South Louisiana, and New Orleans, in particular and could be considered the northern most part of the Caribbean, as well as a part of French Arcadia. From the Mississippi river, the tidal basin, and the port it drew a multicultural intermingling of blacks, French, Spanish, Indians, Islanders, and English all finding home in its humid and fertile climate. Into this hot and multicultural place, they each brought their own religion, ways of talking, food, and music. Walk down any street and hear it from windows, stores, clubs, and cars. Smell the sassafras, boiled shrimp, fried beignets, and chicory coffee. All of it churning and mixing and melding into what the locals came to call a gumbo. Instruments, styles, and influences intermingled. The history of Louisiana music is overflowing with originals and innovators in Jazz, traditional and contemporary, Blues, Funk, R&B, Rock & Roll, Zydeco and Hip-Hop, all of whom have created sounds distinct and unique that could only have come from this cradle of the deep South.

This show is a love letter to that part of the country and our musical history. From Jellyroll Morton and Louis Armstrong through the Marsalis family, from the great R&B studios that gave us Fats Domino, Allen Toussaint and Slim Harpo, to the funk of Dr. John, Galactic and Jon Cleary’s Monster Gentlemen. From the dance grooves of Zydeco to the infectious brass bands of Dirty Dozen, Trombone Shorty, and of course Mardi Gras Indians.

Tune in on Sunday, July 12, from 5-6pm when The Jazz River camps out along the banks of the Mississippi and the great Delta for a little bit of this and a little bit of that, and of course some Lagniappe [you’ll have fun looking it up and using it in a sentence].