The Jazz River—Musical Travels Along the Silk Road 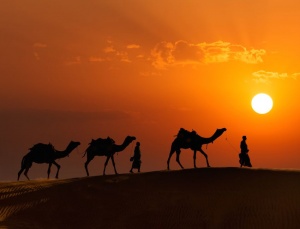 For a thousand years, beginning in 100 BC, travelers across “the Silk Road” exchanged goods and merchandise, jewels, food, animals, and yes. even slaves. But also, they shared knowledge and information in the form of science, medicine, agriculture, and religions; from China, across Central Asia, down to India, across the Middle East and into Mediterranean Europe.

Historians consider the first explorer to be Chinese diplomat Chzan Tsan in the first century BC. However, it wasn’t named The Silk Road until German explorer Ferdinand Von Richtofen coined the term in the 19th century. Here in the 21st century, the Silk Road still holds an exotic and mysterious hold on one’s imagination.

Like many travelers before, during and since, I am sure that many brought along their instruments, made music, and exchanged musical ideas with those they met along the way.

Tune in Sunday, July 4, at 5 pm when The Jazz River goes overland to imagine what music they may have found in far-flung cities and towns, and what might have been made of this cultural exchange. Only on KUVO JAZZ.

The Jazz River—Give The Drummer Some