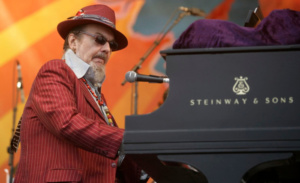 Starting out as a studio guitarist and kid producer, Mac Rebennack was steeped in the mysteries of New Orleans R&B, and Fonk. He also learned the mystical ways of Hoodoo priests and priestesses, bathed in the cauldron of Caribbean, Spanish, Indian, African and Cajun-Creole sights, sounds, textures, and intermarriages that is New Orleans. In the late 60s, while living in Los Angeles, making a living in the studio working for the likes of Sonny and Cher and the Wrecking Crew, he and his merry band of NOLA renegades went into the studio and invented Dr. John The Night Tripper, a singularly unique blend of Revival tent shows, Deep R&B and emergent psychedelia that caught fire and made him a household name. He worked with everyone, from B.B. King to the Band, from Art Blakey to Doug Kershaw, from Rickie Lee Jones to Hank Crawford to the Black Keys. To Doc, as long as the music felt good the style didn’t matter at all. In his lifetime he won 6 Grammys in 5 different categories. He did tribute records to Ellington, Armstrong, Johnny Mercer, and of course honored his past in Professor Longhair, Fats Domino, James Booker to name a few.

Mac’s bands were always loaded with great players, soulful and funky with amazing drummers and percussionists, bringing that unique, just-off-the-one beat that New Orleans invented. And the Doctor himself exuded an old-school cool second to none.

Tune in Sunday, September 5, at 5 pm when The Jazz River presents 3 phases of Dr. John’s career—Potions: his trippy swamp groove psychedelia, Herbs—his commitment to ‘Feel Good’ music, and Roots—his homage to some of his mentors, heroes, and teachers. Only on KUVO JAZZ!

The Jazz River has the Blues