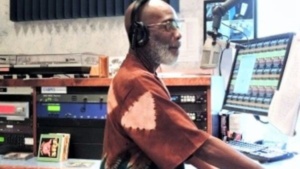 A little history and backstory. The Jazz River, coming up on its 2nd anniversary was three years in the making; sitting on the bench waiting its turn to be put into the game. Because I was going to replace the time slot previously held by Afro Pop Worldwide and especially before that, the inspiration for the show was Origins Orgy in Rhythm, Linard ‘Scotty’ Scott’s utterly unique presentation of exploration of the Black Diaspora in music. “From Harlem to Dar es Salaam, from Trenchtown to Motown, from Ragtime to No Time, from Bebop thru Doo Wop to Hip Hop.” I imagined my show as a distant cousin to his with a wider look at the world through the tributaries of jazz. Knowing that I was going to take over that time slot I wanted to show love and respect to his loyal listeners and maybe win over some to where I was/am coming from.

August 3rd marked the 6th anniversary of Scotty’s passing and joining with the ancestors and The Jazz River pays homage with my own attempt to explore that diaspora he so eloquently outlined.