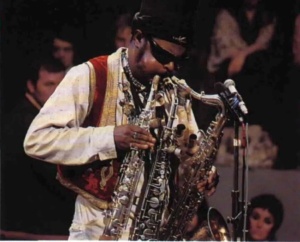 “Rahsaan Roland Kirk was a Titan. A walking university of theses on the history of Jazz and Black Classical Arts. Basically, blind from birth, on his own he mastered the tenor sax, flute, and clarinet, and when that wasn’t enough he reinvented/re-adapted the saxello into a straight soprano now called the Manzello. He did the same with the straight alto now called a Stritch. And he played them all simultaneously, along with nose flutes, percussion and anything and everything you could make music with wrapped around his neck and affixed to his body, including a transistor radio. His stage show was part-history professor, part mystic, part street corner preacher, part political and social satirist, and of course all music. He was also dismissed and decried as a sideshow in part because certain critics could not look beyond the visual and see (i.e. listen) with their heart and soul to the incredible inventiveness that came out of him. This made for a rough life inside the already rough life of a jazz man. But oh, the beautiful music and messages that he left us with. He is without a doubt one of my all-time favorite musicians of any genre and any era. A big regret is that I never saw him perform. I had tickets for a Chicago show only to learn that he passed away in Indianapolis just days earlier. Alas.

One of his greatest tunes and recordings is called “Bright Moments” which is such a potent metaphor for a blind man who vision was through the world of sound and music. Tune into The Jazz River, Sunday August 2 from 5-6 pm for an excursion into the breadth of his art. Tenderness, humor, rage, THE inside/outside blowing, circular breathing, nose flutes, deep philosophy and the absolute originality and character that made him one of a kind. Only on KUVO Jazz.”