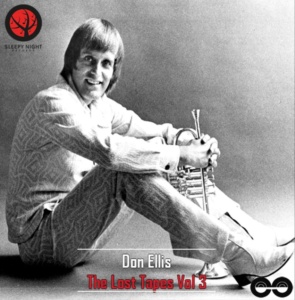 Trumpet player and big band leader Don Ellis is largely forgotten today. But beginning in the mid-1960s until his passing in late 1978, his big bands were something unique. Incorporating rock rhythms, odd time signatures {7/8, 9/8, 13/8 for example}, microtonality with Don’s quarter-tone trumpet, elements of Indian music, and frequent bookings alongside popular rock musicians and bands of the day {Grateful Dead, Quicksilver Messenger Service, Leon Russell, etc.} made the band a good concert draw.

After a short stint in military bands, where he met musicians such as Cedar Walton, Ellis joined the Maynard Ferguson orchestra in 1959. By the early 1960s, he was featured in bands led by George Russell and Paul Bley.

1966 was a pivotal year for Don and his new big band. Shortly after a well-received performance at the Monterey Jazz Festival, producer John Hammond signed the Ellis band to a contract with Columbia Records. During this time Don composed the Oscar-winning score for The French Connection making extensive use of microtonality and dissonance which was revolutionary for the time and would still be so today.

Heart problems sidelined Ellis for much of the 1970s. One of his last public appearances with his big band was one of his best at the Montreux Jazz Festival in 1977. A little more than a year later Ellis was dead at the age of 44.

Tune in Wednesday, July 21 at 8 pm for a remembrance of Don Ellis {the 87th anniversary of his birthday is July 25} featuring his big band, and as a sideman with the Maynard Ferguson big band and the George Russell sextet with Eric Dolphy. Only on KUVO JAZZ.