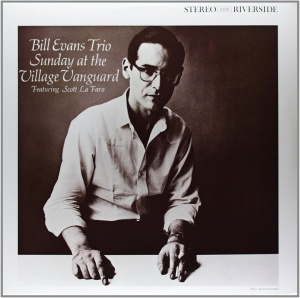 When can both a person and a place play pivotal roles in the career of a jazz musician? In the case of pianist Bill Evans, it’s when the person is George Russell and the place is the legendary Greenwich Village jazz club, the Village Vanguard.

George Russell, born in Cincinnati, Ohio on June 23, 1923, was a composer, arranger, pianist, bandleader, and jazz theoretician perhaps best known for his book “The Lydian Chromatic Concept of Tonal Organization”. The book presented the case for jazz musicians to use scales (or modes) rather than chord changes for improvisation. The Miles Davis recording “Kind of Blue” would be but one example.

Among other highlights of Russell’s musical career, he composed “Cubano Be, Cubano Bop” for the Dizzy Gillespie Orchestra in the late 1940s in an early attempt to fuse bebop and AfroCuban music together. 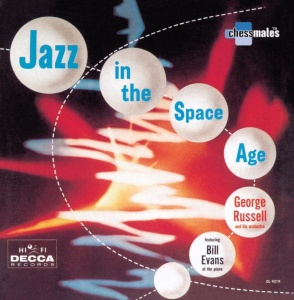 By the mid-1950s George Russell was recording his own music for the RCA and Decca record labels. Bill Evans anchored the piano chair on all of them. Evans’ solos on Russell’s “Concerto for Billy the Kid” and “All About Rosie” raised his profile among musicians if not the public significantly. One could make the case that the career of Bill Evans might not have reached the heights it did without George Russell.

Although the Village Vanguard has been the site of countless live recordings, the five sets recorded by the Bill Evans Trio on Sunday, June 25, 1961, were something special. It was the trio’s final day of a two-week booking at the club where it was the opening act for Lambert, Hendricks, and Ross. Featuring Bill on piano, Scott LaFaro on bass (he would tragically be killed in a car crash ten days later), and Paul Motian on drums, the trio was firing on all cylinders. Orrin Keepnews, the producer of the recordings and owner of Riverside Records, said there were no “bad takes”.

While these performances were recorded sixty years ago this week, they sound just as timeless as they must have in 1961.

Be sure to tune in to The Night Beat on Wednesday, June 23, at 8 pm with your host Doug Crane for classic (and should be classic) jazz from Bill Evans and George Russell.

New Music on The Night Beat