We’ll note the birthdates of saxophonist/composer Benny Golson and pianist/guitarist/vocalist/composer Antonio Carlos Jobim on the next Night Beat with me, Doug Crane as your host. While it’s impossible to overlook the contributions both men made as performers, both will never be forgotten for the compositions they wrote, many of which have become jazz standards in a few short decades. 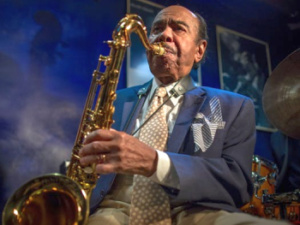 Born January 25, 1929, in Philadelphia, PA, Benny Golson is a living legend. After studies at Howard University in the late 1940s, his professional music career began with the Bull Moose Jackson Orchestra. One of his bandmates was Tadd Dameron, who upon starting his own band hired Benny and encouraged him to write and arrange his own compositions. Benny joined the Dizzy Gillespie Big Band in the mid-1950s and remained until Dizzy broke up the band.

Soon after, Benny joined Art Blakey’s Jazz Messengers. His compositions such as “Along Came Betty” and “The Blues March” became staples of the Messengers for decades to come. Besides writing for the band, Benny added some much-needed behind-the-scenes protocol to ensure band members would be paid, maintained an itinerary of upcoming engagements and instituted a dress code that demanded every Messenger wear a three-piece suit and tie for performances. He also worked with pianist Bobby Timmons in helping him construct a song out of a motif that Bobby would frequently play. That motif evolved into the song “Moanin”.

After a few years of co-leading the JazzTet with trumpet player Art Farmer in the late 1950s and early 1960s, Benny opted for a steadier gig writing for television shows (Mannix, Mission Impossible and M*A*S*H) and movies throughout the 1960s and early 1970s.

By the early 1980s, Benny returned to the jazz scene alongside Art Farmer for a new version of the JazzTet.

In 1997 Benny was named a National Endowment for the Arts Jazz Master. 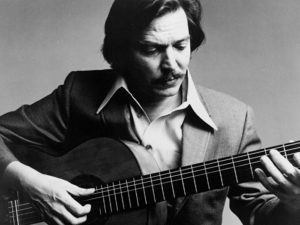 Antonio Carlos Jobim was born in Rio de Janeiro, Brazil on January 25, 1927, and passed away on December 8, 1994.  While Jobim was working as a music director for Odeon Records in the late 1950s, Joao Gilberto recorded “Chega da Saudade”, a song written by Jobim. After it became a surprise hit, an album of Jobim tunes soon followed. The Bossa Nova sound was on its way to becoming a worldwide phenomenon.

The recording by Stan Getz and Astrud Gilberto of Jobim’s “The Girl from Ipanema” was awarded Song of the Year in 1964. Getz/Gilberto, the album that contained “Ipanema” won a Grammy for Best Album of the Year in 1964, a first-time event for a jazz album and only repeated once since then for Herbie Hancock’s “The Joni Letters” some forty years later.

The KUVO music library includes over 1,600 recordings of songs by Antonio Carlos Jobim and just under 500 penned by Benny Golson. And I’m not going to leave the studio until I play every single one. Or however many I can play in two hours, whichever comes first.