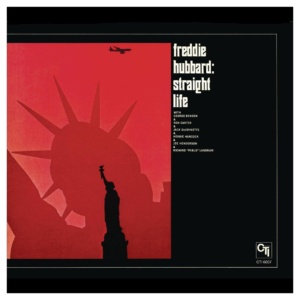 Recorded at the Van Gelder Studios in November of 1970 and released in early 1971, “Straight Life” was the second recording by trumpet/flugelhorn player Freddie Hubbard for Creed Taylor’s newly-independent CTI label.

The album featured only three songs: the title tune, Weldon Irvine’s “Mr. Clean” and the standard “Here’s That Rainy Day”.

The album starts with Freddie and Jack engaged in a bit of “call and response” to begin “Straight Life”, the only tune on Side One and clocking in at 17 minutes 30 seconds. One of the things I like about this track is Jack DeJohnette’s drum sound, especially in view of how anonymous sounding drummers were to become on later CTI releases.

I think “Mr. Clean” is the standout track on the album. While the tune stays locked into an F min7 chord throughout, it never sounds that way largely due to bassist Ron Carter. Behind the first soloist (Freddie Hubbard), he plays a pattern that sticks largely to the root and fifth of the chord (F and C).

Joe Henderson’s up next. For him, Carter fashions a motif that adds a couple of notes: the seventh (E flat) and F an octave above.

While Herbie’s solo pushes the harmonic structure to the limit, the figure Ron Carter plays behind him keeps the tune firmly rooted. Carter glissandos up from a low C to an F (fifth and root) which, when played by him is tasty enough. But then Carter jumps up to the F an octave above on beats three and four with a figure comprised of eighth notes and dotted eighth notes. And Rudy Van Gelder captures the sound of Carter’s bass beautifully.

“Here’s That Rainy Day” closes the album with the trio of Hubbard, Benson and Carter.

As for Weldon Irvine, the composer of “Mr. Clean” and heard on tambourine on the record, about the only thing I knew about him for quite some time was that he composed “Liberated Brother”, a tune that appeared on Horace Silver’s 1973 Blue Note release “In Pursuit of the 27th Man.”

Irvine served as Nina Simone’s music director in the late 1960s and early 1970s. During this time he wrote the lyrics for her song “To Be Young, Gifted and Black” which she introduced at the Harlem Cultural Festival in August 1969 to a crowd of 50,000 people, a performance included in the recently released documentary film “Summer of Soul”.

In 1999, Irvine released “The Price of Freedom” using his rap name mAster Wel. It was a compilation of original songs by hip-hop, jazz, funk, and R&B artists in response to the senseless shooting of Amadou Diallo by four New York City police officers. They were charged with second degree murder but all were acquitted.

If you’re thinking Weldon Irvine is deserving of a documentary, one was completed just before the pandemic hit in full force called “Digging for Weldon Irvine.”