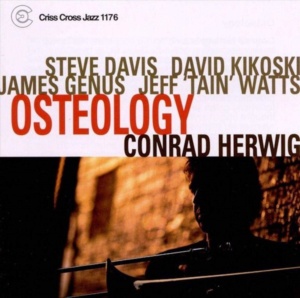 For the 4th and final week of Doug’s Trombone Month feature, he’ll highlight recordings by Steve Davis and Conrad Herwig.

Born in 1967, Steve Davis graduated from the Hartt School’s Jackie McLean Institute of Jazz at the University of Hartford.  Upon graduation, he was part of the final edition of Art Blakey’s Jazz Messengers.  He joined professor and mentor Jackie McLean’s band in 1992, recorded his first album as a leader “The Moon Knows” in 1994, was a founding member of All for One, a combo steeped deep in the tradition of Art Blakey’s Messengers and was part of Chick Corea’s Origin.  He appears on over 150 recordings including roughly 20 under his own leadership.  He is currently an instructor at the San Francisco Conservatory of Music.

Conrad Herwig was born in 1959 and studied with trombonist Trummy Young (a former member of Louis Armstrong’s band in the 1950s) while living with his family in Hawaii.  He attended North Texas State University (now the University of North Texas) where he was a member of the prestigious One O’Clock Lab Band.  He left North Texas to begin playing with the Buddy Rich Band. He later played in big bands under the leadership of Clark Terry, Toshiko Akiyoshi, and Mel Lewis.  His tenure with Mario Bauza set the stage for him to become a long-time member of Eddie Palmieri’s Latin Jazz Band.  He is perhaps best known to long-time KUVO listeners for his performance with Eddie Palmieri at KUVO’s 10th-anniversary party at El Jebel Shrine in 1995 and for his numerous “Latin Side of” recordings of music composed by Wayne Shorter, John Coltrane, Joe Henderson and others that are frequently heard on KUVO.  He has taught at Rutgers University and at the Julliard School of Music.

Among the recordings, we’ll feature are two albums that Conrad and Steve recorded as co-leaders for Criss Cross Records (“Osteology” & “A Jones for Bone’s Tones”).  They’ll provide you, the listener, the opportunity to compare and contrast the differences and similarities between how both men approach jazz improvisation and playing the trombone.

Tune in for the 4th and final week of Doug’s mini-celebration of jazz trombonists Wednesday evening, April 27, beginning at 8 pm MDT only on KUVO Jazz.