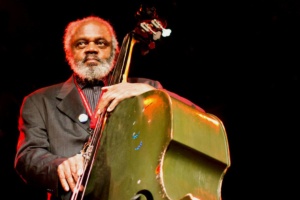 Bassist Henry Grimes was born in Philadelphia, PA on November 3, 1935. In the early 1950s, he moved to New York City where he studied at the Julliard School of Music before embarking on his professional career.

In the mid-1950s he toured with Arnett Cobb, Willis Jackson, Bobby Timmons, and Lee Morgan. By 1957 he was working with Sonny Rollins, Gerry Mulligan, and Anita O’Day. At the 1958 Newport Jazz Festival, he performed with the groups of Benny Goodman, Lee Konitz, Tony Scott, and Thelonious Monk.

He was part of the free jazz movement in the early 1960s working with Cecil Taylor, Albert Ayler, Don Cherry, and others.

As Henry’s widow tells it, Henry went to the West Coast around 1968 to work with Jon Hendricks and Al Jarreau, the project went awry and Henry with a broken bass he couldn’t afford to repair, sold it and disappeared from the music world.
For the next 30 years, Henry rented a small room in a downtown Los Angeles hotel and worked as a custodian and laborer while writing poetry on the side.

Around 2002, a social worker from Georgia who had been searching for Henry discovered him. After being given a bass, he soon returned to the music scene and additionally began offering workshops and masterclasses on major college campuses.
He remained active until 2018 when the effects of Parkinson’s disease made it too difficult to continue. His weakened immune system left him far more likely to contract COVID-19. He passed away from a combination of the two in April 2020.

“Live at the Village Vanguard” was John Coltrane’s first live album to be released and the second of his recordings to be issued by Impulse Records.

It’s been said that the best thing Creed Taylor did as the head of the recently-formed Impulse Records was to sign John Coltrane (Taylor produced Coltrane’s Africa/Brass album for Impulse) and the next best thing he did was leave Impulse soon after to run Verve Records after Norman Granz sold the label to MGM.
It was Bob Thiele, the new head of Impulse, who suggested Coltrane record at the Vanguard over four nights in November 1961. It was also the first time the two of them met face-to-face. And after Thiele did not insist Coltrane play and record “My Favorite Things” at the club, they became friends with Thiele acting as producer until Coltrane’s passing.

Some reviews of the engagement at the Vanguard and the subsequently issued recordings were quite harsh. The presence of Eric Dolphy as a member of Coltrane’s group was especially problematic. In April 1962, Downbeat magazine gave both Coltrane and Dolphy a forum to answer the critics. (As an aside, around 1975 one of my college roommates played “Impressions” from the Vanguard session for a friend of his. My roommate thought it was one of the worst things he had ever heard. His friend told me later she quite liked it.)

Tune in Wednesday evening, November 3, at 8, to hear what the audience at the Village Vanguard heard 60 years ago, music from bassist Henry Grimes, additional movements from Jeremy Levy’s big band reimagining of Gustav Holst’s The Planets which we premiered a couple of weeks ago and more with your host Doug Crane.